Protests, petitions and public meetings have failed to stop Westpac from going ahead with its plan to close 19 of its branches around the country. 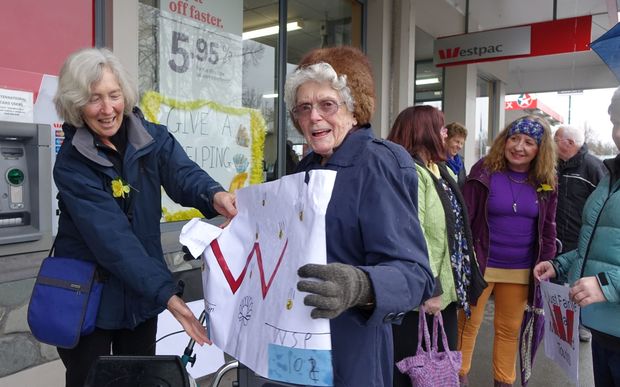 The bank announced yesterday it expects its branches in places like Otorohanga, Waikanae, Ranfurly and Fairlie will shut their doors by early November.

The decision has left some small town mayors feeling like their communities have been deserted.

In Ranfurly in central Otago, Westpac was the only bank in town.

But the branch, with its two staff, will close its doors later this year, leaving Ranfurly's population of 700 without face-to-face banking services.

Central Otago District Mayor Tony Lepper said Westpac's decision was not what the community was hoping for.

"I think it's a disaster for the community to be perfectly honest," he said.

"We've now got elderly people stranded 90km from a bank - a two-hour round-trip to bank a cheque."

Mr Lepper said the community put up a good fight, with about half the town turning out to a protest to try to save the bank.

"Everyone who could help tried their best I think, but at the end of the day it was a corporate decision and they've done what corporates do and that's save pennies, even though they're making millions.

"They've deserted our community in a way."

Mr Lepper said he was already in talks with Westpac about what services would continue to be provided to the Ranfurly community.

Options included having a computer in a public area for people to do their banking online, and employing a digital educator to help older people in particular.

Further north, the town of Fairlie was facing a similar situation.

But she said it would be a hard transition for many.

"But the thing I know about Fairlie and its community is it's incredibly resilient and if Westpac are prepared to come to the party and provide alternative services and assist our people to make that transition from one form of banking to another, at least it's not just walking out and leaving them with nothing."

Ms Barlow said she also appreciated that Westpac had taken on board some of the community's concerns.

"You can jump up and down but it's a commercial reality. I appreciate that Westpac has listened to the comments and actually are trying to do something to mitigate the impact on our community."

On the Kapiti Coast, Waikanae locals were also vocal opponents of Westpac's plans to close their town's branch.

"Older people are not yet up with the technology. Some of them are, but the majority of them aren't and they prefer to get their money in their hand."

Mr Daniell said many loyal customers are upset by Westpac's decision and some are thinking about changing banks.

"We will certainly be saying to them you should consider moving your bank account to the bank that remains and we just hope ANZ doesn't decide that it's going to shut down too."

In a statement, Westpac said supporting customers through the changes was a priority.

It said it would be discussing ideas with community leaders about how people can do their banking now.