A slip caused by heavy rain is blocking the way of rugby fans heading to Hamilton for Taranaki's Ranfurly Shield challenge.

The lower North Island has suffered 36 hours of persistent rain. 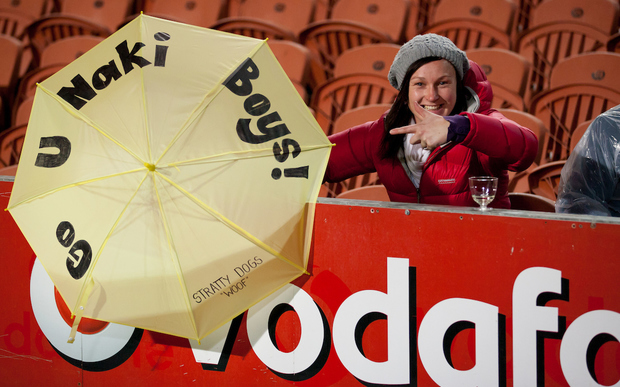 Persistent rain could hinder Taranaki supporters' attempts to get to the Ranfurly Shield clash in Hamilton. Photo: Photosport NZ

In Taranaki, State Highway 3 from the Awakino Tunnel to Tongaporutu - Taranaki's main road north - was blocked by a slip and will remain closed overnight due to unstable rocks.

On Sunday afternoon, Willy from the Junction Service Station in Awakino said traffic was backed up for about 5km. He said cars were being turned around and sent back north.

New Zealand Transport Agency did not have an estimated time for when the road would be clear and advised drivers to try alternative routes or delay their trip.

Heavy rain also caused slips on Rimutaka Hill Road near Wellington, blocking one lane this morning. It was cleared about lunchtime.

However, speed restrictions in place at State Highway 2 at Kaitoke in Upper Hutt are expected to remain in place until tomorrow afternoon.

In Wairarapa, a slip was blocking the westbound lane of the main road to Wellington near Featherston.

There were also minor slips on Paekakariki Hill Road and Maungakotukutuku Road but those roads remained open.

MetService said the wet weather was finally easing but drivers were still being advised to take care on the roads.

A heavy rain warning for Wairarapa south of Masterton until late this evening remained in place.

Duty forecaster Derek Holland said it had been a soggy time for some areas.

Yesterday, firefighters had to pump water out of two houses in Paraparaumu and Raumati South.

In the South Island, State Highway 6 from Westport to Greymouth was down to one lane following a slip.

There was also surface flooding in the Lower Buller Gorge on the West Coast, and at State Highway 6 near Ross, the Transport Agency said.

Roads were open but drivers were advised to take care.

Power has been restored to the more than 2000 homes that lost electricity in west Auckland this morning.