The rebel ratepayers of Mangawhai in Northland have won a partial victory in the High Court. 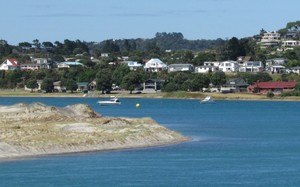 The court has found that rates levied from 2011 to 2014 by the Northland Regional Council, via Kaipara District Council rate demands, were unlawful.

In an interim decision, Justice Duffy found the Northland Regional Council (NRC) has no power to delegate the assessment of rates or the recovery of arrears to other councils.

"The errors I have identified are serious and substantial," the judge said.

"In short, the NRC has failed to exercise its statutory powers properly when determining rates resolutions and it has unlawfully sought to delegate the performance of a number of its functions in relation to rates to the Kaipara District Council."

The Mangawhai ratepayers' chair, Bruce Rogan, said the ruling was very welcome, although the court did not uphold the group's challenge to penalties and GST imposed by the Kaipara District Council.

The council should now agree to negotiate a deal to end the six-year-old Kaipara rates row, Mr Rogan said.

"We offered to pay the undisputed portion of the rate bills in 2014 two years ago," he said.

"We have only ever disputed the penalties, which were unfair, given the council's unlawful actions. I collected it all up, a bunch of cheques worth about a million bucks, and they [the commissioners] threw it back in our faces."

Mr Rogan said he still considered that was disgraceful.

"If the council had just accepted the money, admitted that the people withholding their rates were wronged, that their case had merit, we could have all moved forward together. "

Kaipara District Council chief commissioner John Robertson said it would prefer not to comment because the case was still before the court, and the judge had invited submissions from the councils on what should happen next.

The Northland Regional Council was also digesting the implications of the judicial review and would not comment.

At the peak of the dispute, about 1000 ratepayers were withholding their rate payments in protest at ballooning debt levels and the council's failure to disclose its borrowing for EcoCare - the Mangawhai wastewater scheme.

The government sacked the council, installed commissioners and passed a special bill validating the unlawful rates struck to pay for the scheme.

The council believed the bill validated all the rates.

But the High Court decision has found the bill did not validate the unlawful Northland Regional Council portion of the Kaipara rates, a sum of millions of dollars.

The court has made no ruling on whether the unlawful rates should be refunded, and has invited submissions from both parties.

It said the regional council would also have to consider if the ruling affected the rates it has received from the Far North and Whangarei District Councils, to which it has also delegated rating powers now found to be unlawful by Justice Duffy.