The Ministry of Health is raising the age at which women begin having cervical smear tests from 20 to 25. 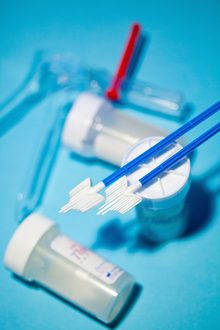 The virus which causes 90 percent of cervical cancers is said to be common in younger age groups. Photo: GARO / Phanie

The ministry said there was now a strong body of evidence that screening women between the ages of 20 and 24 did more harm than good.

National Screening Unit clinical director Jane O'Hallahan said the main reason was that the human papillomavirus (HPV), which caused more than 90 percent of cervical cancers, was common in younger age groups and typically cleared up on its own.

She said screening of that age group raised the stress and anxiety associated with additional tests, treatments and unnecessary colposcopy.

The age change is in line with that of many other countries, including Australia, England, Scotland, the Netherlands and France.

"The HPV vaccination programme in schools offers the best protection to younger age groups from HPV infections and invasive cancer. There will be accelerated progress with the programme's coverage rates with boys also being offered the vaccination from 2017.

"We recognise that there are rare cases of younger women developing cervical cancer, however the evidence shows this is usually aggressive forms of cancer which screening would not have protected them from."

Dr O'Hallahan said if someone outside the age group for screening noticed any symptoms, such as unusual bleeding, discharge or pain, they should seek medical attention promptly.

Concern that younger girls will be caught out

The Federation of Women's Health Councils said it disagreed with the plans to raise the age.

Its co-convenor, Barbara Holland, said some young women needing further testing or treatment could miss out.

"We originally supported primary HPV screening for all women, but we have since seen statistics on the number of high-grade lesions for the under-25 cohort, and we believe they should have a different testing process at this stage", Ms Holland said.

"They should have their cells tested at cytology as well as the primary HPV test."

Ms Holland said there were concerns about the modelling conducted for the new testing regime and warned against the changes.

"We understand the modelling was done on overseas people and that it was done on the basis of looking at other programmes that don't use the automated, sophisticated cytology [cell] testing that we have.

"The number of non-HPV-related atypical presentations will not be captured under the new primary testing focus," she said.

But Family Planning has praised the decision to raise the age.

Dr Roke said international evidence showed that screening before the age of 25 did not make any difference to the mortality rate for women who have developed cervical cancer.

Once a young women under 25 acquired the HP virus most were able to get rid of it if they had a good immune system over the next few years without it causing any harm at all, said Dr Roke.