First home buyers looking to buy a small apartment in Auckland to get on the property ladder could be turned away by banks, warns a mortgage adviser. 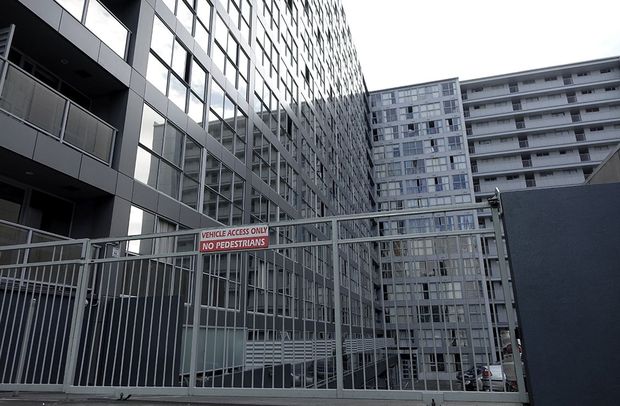 Apartments may be the only option for some first-home buyers in Auckland. Photo: RNZ / Nicole Pryor

With the average house price in the region officially reaching $1 million for the first time, the government says the best way for young people to get on Auckland's property ladder is to buy an apartment.

Housing Minister Nick Smith said while he would be cautious about buying a house in Auckland, he might consider an apartment.

"I know new developments that are coming on stream that have got good quality apartments, say in the central city area, at prices that could be a good deal.

"It would depend on the kind of deal that you are able to secure."

He said the unitary plan had now put some limits to stop more of the tiny shoebox flats - some of which have suffered plumbing and water faults - from being built.

"There was an excessive number of those super-small 40 square metre apartments that were built back in 2004.

"The new rules do actually set some reasonable rules there."

Mortgage Supply Company chief executive Jenny Campbell said it was precisely those apartments homebuyers needed to watch out for.

She said not all apartments were created equal and not all banks were willing to lend on them.

"You have to be careful about the size, and make sure that it fits within the general lending criteria that banks have.

"You also need to make sure there's no issues with the building, water-type issues, remediation, that sort of thing."

She said most banks would not lend on any apartment smaller than 40 square metres, and others would limit the loan-to-value ratio, hiking up their deposits.

"They just don't perceive them to be quality living environments, they tend to end up being very cheap rentals inhabited by students.

"Not getting at the students, but it does mean that sometimes those buildings become devalued."

She said New Zealanders did need to start looking at apartment-living as a realistic and viable investment, as long as it was of high quality.

He said first home buyers anywhere else in the world typically bought apartments, and that was fast becoming the reality in New Zealand.