Taxi drivers in Christchurch and Wellington have banded together to protest against alternative taxi service Uber. 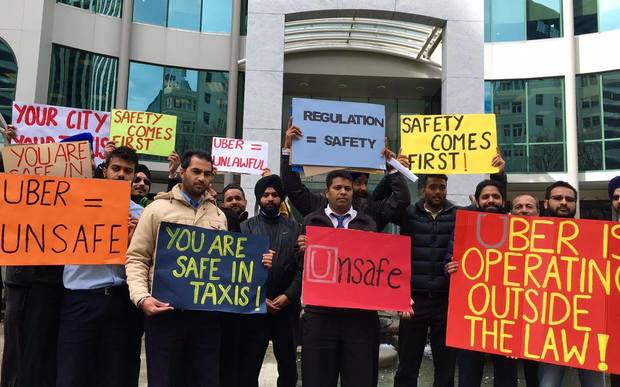 Taxi drivers in Wellington protest against Uber as part of a national day of action. Photo: RNZ / Rosie Gordon

The move was part of a nation-wide protest against Uber, held on Monday in main centres around the country.

More than 50 protesters gathered in Midland Park in the capital city demanding the government ban the service.

"We are protesting because Uber is not operating under the law so we are here on behalf of all the taxi drivers in Wellington," the protest organiser, Bhupinber Singh, said.

In April, Uber changed its rules, dropping its requirements for drivers to have a passenger endorsement for their licence or a certificate of fitness for their car.

It said in July that it had alternative ways to meet the same safety requirements.

Mr Singh said the company was breaching the New Zealand Transport Agency's regulations, and the government should "immediately ban" drivers who didn't comply with the rules. 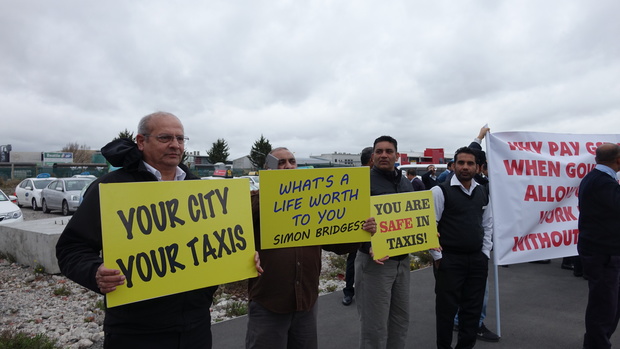 One taxi driver in Christchurch estimated incomes had plummeted by 30 to 40 percent since Uber's arrival. Photo: RNZ / Maja Burry

"All the taxi drivers in Wellington, no matter what company they work for, have to spend a fair bit of money to become a taxi driver ... probably costing about $3000-$4000," Mr Singh said.

"For Uber drivers, it's not costing them anything. If they have a full driver's license and a car, they can drive for Uber," he said.

Vikram Jeet Singh, who drove taxis to support his family, said the new company's arrival had affected those who relied on taxi-driving as their main source of income.

"It's definitely making a difference to older taxi drivers, they have to spend more time on the road and can't afford to manage their own expenses to make up their livelihood," Mr Singh said.

"This is not just a fight for us it's a fight for the same playing field that will be better for society."

In Christchurch, more than 40 taxi drivers lined the footpath of Moorehouse Avenue with signs on Monday afternoon.

It was the second protest to be held over Uber in the city.

"Uber has been operating illegally for months and months in Christchurch, it's putting the public at risk, the safety of the driver, the safety of the customer... It's an illegal business and everyone is sitting on their hands in Wellington doing nothing."

Taxi driver Adrian Morgan said it was thought that local taxi drivers' incomes had plummeted 30 to 40 percent since Uber's arrival in Christchurch.

"I work at the airport a lot, and I can see how slow it is there now and it's just having an effect on us all."

The government needed to step up, she said.

"The taxi drivers here... they haven't seen the government doing anything, all they are asking for is fair competition and a level playing field. I think all New Zealand businesses would support that call."