Queenstown's council is introducing new parking controls in a bid to manage congestion and pressure on carparks in the rapidly growing tourist hub. 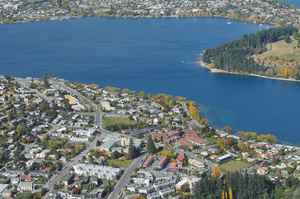 In the past month the council has reduced the number of leased car parks to free up car spaces in town, and in it October will trial extending parking enforcement hours from 6pm until 9pm.

But a spokesperson for a CBD lobby group said the council was tinkering around the edges and needed to commit to big ticket items, including better public transport, to sort out the congestion problems.

Downtown QT general manager Steve Wilde wants to see a large carpark building on the fringe of the town, a transport hub and a bypass around the town centre to be considered by the council.

"This is tinkering round the edges and what needs to happen is the big infrastructure projects need to be put on the agenda. We've been very clear about this, they need to be costed out and they are doing it but nothing is really going to change until the big projects come online.''

Mr Wilde said the government needed to get onboard with the plans, because Queenstown was being used to sell tourism internationally.

"When you look at the amount of foreign exchange coming into the country because of Queenstown and tourism, it makes sense for the whole country to have Queenstown working properly."

Prime Minister John Key, who is also the Minister for Tourism, said Queenstown's increasing traffic and parking problems were raised with him by the mayor when he was in town last week.

He said the town needed more infrastructure and he was not ruling a tourist tax.

"That was part of what the Regional Amenities Fund is all about, setting up the $12 million. We always argued it was a fairly small amount and it wasn't really for roading, it was for public toilets and the like. But we're aware of the pressure in some of these towns and cities and we're looking at whether we should do more and how we could do more if we did.''

Queenstown Lakes District deputy mayor Lyal Cocks said the problems were solvable, but there was no quick fix.

"The momentum has really picked up and there's only so many cars you can take into a town centre. Queenstown is now a city and like many cities you shouldn't expect to drive into the centre so you've got to look at different ways of getting there.''

Council chief executive Mike Theelan said the potential solutions would not pay their own way any time soon, and the question was whether the community was prepared to invest.

"You simply can't build your way out of congestion, you need to change the way people travel and make better use of resources that you have."

One of the possibilities being considered was a park and ride, based at Frankton.