The first Sikh to run for a place on Hamilton's city council has had his billboard defaced with the name ISIS (Islamic State) in black paint. 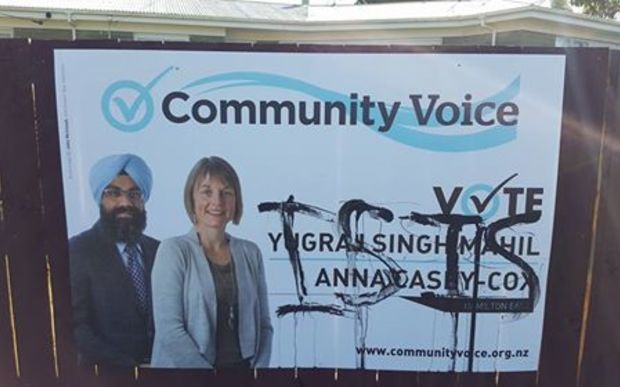 The billboard showing Yugraj Singh Mahil and another candidate Anna Casey-Cox which was defaced and has now been removed. Photo: Supplied / Facebook

Yugraj Singh Mahil is pictured on the billboard with another candidate, Anna Casey-Cox. Both are first-time candidates in the city's east ward, standing as part of the Community Voice group.

Mr Mahil had a busy day handing out leaflets yesterday and did not find out about the defaced billboard, on the corner of Carrington Ave and Vesty Ave, until RNZ told him last night.

"It's more than insulting," he said. "People mostly change the appearance of the person but tagging such a group is very harsh, very distressful."

Mr Mahil said in his 17 years in Hamilton he had never faced that sort of behaviour. "I think this is due to the turban; that happens sometimes, people get confused, they think only Muslims wear turbans."

However with Hamilton's Sikh temple the first to be established in New Zealand, he said, most people in the area were more aware.

"Sometimes these sort of things, I think teenagers or kids they do it, they don't have enough knowledge about the religions and they don't know the difference."

Fellow candidate Ms Casey-Cox said she found out yesterday when she saw a photo of the billboard on Facebook and within 20 minutes they were able to take the billboard down and clean off the words because the paint was still wet.

She said it was one thing to deface a billboard with something like a moustache, but painting the name of the violent extremist group was sick and ignorant.

"This was a different kind of defacing of a billboard and it was just at a whole different level. And I think it's just somebody who's not even thinking. It's just someone who is relatively ignorant has done it."

She said it was probably a spur-of-the-moment action without much thought behind it.

"I really don't know what the motivation would be other than to incite some concern in the community and get at the Muslim community perhaps."

Ms Casey-Cox hoped the incident leads to greater awareness about religion and culture.

Sikh National Party list MP Kanwaljit Singh Bakshi said ignorance was no excuse and there needed to be greater awareness of the difference between Sikhism and Islam.

"It's totally irrelevant the mentioning of ISIS on the signboard, and it's totally unacceptable and particularly the Sikh community is hurt by this action."

He said Sikhs had been living in Waikato since the late 19th century, and Mr Mahil was a prominent member of the Hamilton community.