Red Cross and Civil Defence volunteers will visit more homes in Havelock North today as authorities try to gauge the full level of water-borne illness and offer help to residents.

Scores of people in the Hawke's Bay town have been infected with the illness that is so far being linked to campylobacter bacteria in the town's water supply and some have suffered "appalling" symptoms.

People are still having to boil water before they drink it, because the Hawke's Bay District Health Board hasn't been able to rule out another potential source of illness, cryptosporidium, which would not be killed by chlorination.

Others are relying on filling water bottles from water tankers parked in strategic places.

Havelock North businesswoman Kerry Mackintosh contracted the gastric illness and and said the feeling had been terrible.

"I couldn't eat anything, I couldn't drink enough fluids even with electrolytes to stay hydrated," she said.

'"There was just appalling diarrhoea, I was bleeding and I could not get out of bed.

"I could hardly get myself to the medical centre where they sent me straight to hospital so it was just appalling."

The spread of this problem forced schools to shut down, either because the staff, pupils or parents were sick, and one class was down to just four pupils present before authorities decided staying open was just not worthwhile.

Many activities such as sports games and arts shows have been postponed, and last night one usually bustling pub was all but empty. 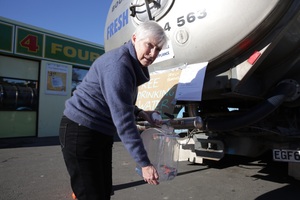 The crisis has forced people like Havelock North office manager Gail O'Donnell to collect water from a tanker provided for use by residents.

"I think it is ever serious and it is disgusting that Havelock residents have been put through this," she said.

"We were in Auckland and did not arrive back until last night so it has not affected me, but my neighbour is sick and I know a couple of other people who are very sick as well."

Yesterday, the Red Cross visited more than 450 homes in the suburb of Anderson Park, giving out advice and supplies like toilet paper and nappies.

Dr Mark Peterson, chief medical officer for primary care, said numbers going to the hospital emergency department had tailed off and were "in their tens". One of the two people who were in intensive care has been mvoed to a general ward and the other is improving.

At least 270 people in Havelock North went to their doctor yesterday.

Dr Peterson visited GPs practices and told Morning Report he was amazed at how they were coping.

"They were seeing literally hundreds of patients, they weren't complaining, they were getting on with it and doing it and I was just so impressed with their ability to cope."

Looking for the problem

It is still unclear how the contamination of the town's water supply happened.

The Hastings District Council said a link had been established between aquifer water and contaminated surface water, but how they were linked was not yet known.

Wayne Bradshaw, a council member from Havelock North, blamed the problem on two bores on Brookvale Road on the north eastern edge of the town.

These wells were 24m deep, and investigations will try to find out how faecal matter got that deep.

Almost everyone in town has a theory - that it somehow seeped from the Tukituki River into the aquifer; that recent torrential rain contaminated the wells near the surface; or that a recent power failure caused a sewage pumping station to fail and let sewage seep into the water. 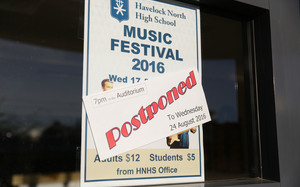 These other views will be considered by formal investigations.

Whatever the cause, the consequence was not confined to humans.

Havelock North vet Nicky Chadwick said there had been an increase in dogs coming in for treatment, suffering from the same symptoms as humans .

"Some animals can cope with being treated as outpatients, but some had had to be on i/v fluids just to encourage their hydration."

So far there have been scores of cases of confirmed cases of campylobacter and a similar number of probable cases, but there were likely to be far more.

Medical staff said it was not always easy to say what was going on in the community, because there was sometimes a delay between when people get sick, when they went to the doctor and when they get sick enough to go to hospital.