Real estate company Colliers International suggested the government house homeless people in tents and warehouses in an urgent report for the Ministry of Social Development. 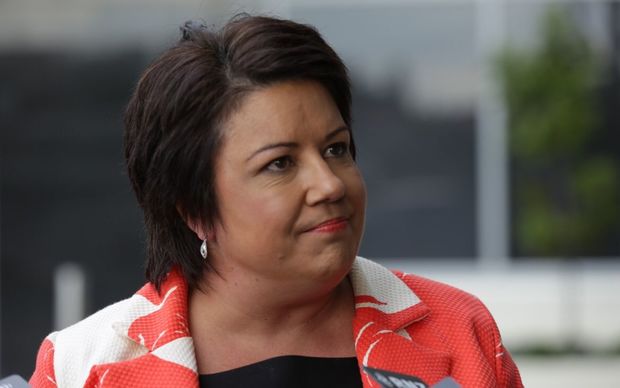 Social Housing Minister Paula Bennett rejected the suggestion, which was put forward in a report commissioned by the ministry. Photo: RNZ /Cole Eastham-Farrelly

"We've been looking at - should we almost pre-purchase in some motels. We've got a report that's just come in yesterday morning - that we are looking at that, if that just gets us through particularly this winter period, and it's something we could do relatively quickly, being in the next two to three weeks," she said at the time.

Checkpoint with John Campbell was denied a copy of the report under the Official Information Act, but it has since been published online.

Colliers had a week to come up with 100 placements in Auckland - half for singles, and the other 50 spots for small families.

They had to be ready within a month, and viable for three to six months.

"This approach will achieve housing of suitable quality and design, scalability, avoids long-term commitments, and is likely to achieve reasonable value for money."

Colliers' report said most people stayed in emergency housing for 12 weeks - but, ideally, people would be out in six.

"Other options that may be viable, but are not commercially procurable and are already assumed to be exhausted are surplus housing from Housing NZ, housing held by the NZ Defence Force, and charitable offerings from marae and churches."

Other suggestions - including "enhanced tents" and warehouses - were suggested, but rejected by Ms Bennett. Shipping containers were given a "maybe".

Asked for an interview, the minister's office referred RNZ to the Ministry of Social Development, as did Colliers International.

In a statement, the ministry said it had picked Colliers because of its commercial and local knowledge.

"Recognising that the Auckland market had its own challenges and that more could be done to help people with emergency housing needs when providers were full, the ministry looked to work with an organisation which had the commercial expertise to help us identify other options," the ministry's general manager of housing contracts, Kelvin Moffatt, said.

"The resulting report will be used by the ministry in its ongoing policy work."

Salvation Army social policy analyst Alan Johnson said bulk-buying would not work anyway because the accommodation wasn't there to buy.

It did seem like a last-second response, he said.

"It does point, however, to a degree of panic on the government's part.

"All of a sudden winter came up on them, and they had people living in cars, in tents and in shacks, and it's an issue they need an urgent response to, which is disappointing really."

"The report was completed on an urgent basis over a short time period - less than one week from the date of instruction.

"Clearly the government are scrambling over the emergency housing issue, and giving an external contractor one week to pull together a report which is incredibly important seems a little bit flippant."

The report's preferred option was bulk-buying motel rooms at a cost of $1.6 million for six months.

Act leader David Seymour said that, on paper, the government had done the right thing in seeking private sector expertise to deal with an urgent problem.

But he said the problem was deeper than that.

"Given the housing crisis that's been allowed to emerge, going to motels [for] that surplus capacity is actually a fairly sensible solution," he said.

"Because the government has been so poor at solving the problem over a long period of time, you do end up with solutions that work on a short timeframe such as motels."

In July, the government entered talks to build between 100 and 140 modular homes in three locations in South Auckland, with tenants moving in by autumn next year.