The Marlborough District is bolstering its hazards response plan ahead of its largest ever schedule of cruise ship visits to the Sounds. 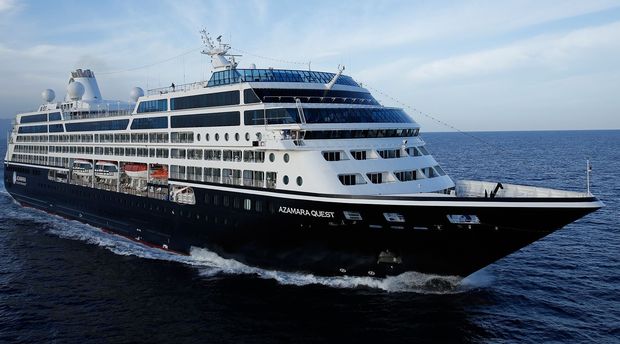 Azamara Quest may have struck a rock in the Marlborough Sounds in January. Photo: Azamara Club Cruises.

Harbourmaster Alex van Wijngaarden said up to 50 cruises are expected in the Marlborough Sounds this summer, including one of the world's largest cruiseliners, Ovation of the Seas.

The Quantum Class vessel is operated by Royal Caribbean International, and is among the world's second largest class of cruise liners. Ovation of the Seas is 346 metres long and carried close to 5000 passengers. It will be the largest cruise ship to have ever sailed New Zealand waters when it arrives this summer.

The Marlborough district's emergency services manager, Brian Paton, said the gap in the response plan was detected from a recent review, which discovered the lack of robust procedure for how to rescue potentially thousands of passengers if a ship sank in the Sounds.

Mr Paton said the risk of a marine accident grew as the number of cruise ships increased, and planning would now be given a higher priority.

Mr Wijngaarden said it would be foolish to ignore the potential for a large-scale accident.

"There is a plan that has been developed by multiple agencies, what we would term a mass rescue, in the event of a cruise ship sinking. It looks nationwide but we have a component which is the Marlborough component - so that's if we have an accident, how we would go about rescuing these people," he said.

Mr Wijngaarden said regional plans differed depending on local issues, such as emergency contacts and resources.

Soviet ship the Mikhail Lermontov struck rocks at Cape Jackson - the entrance to Queen Charlotte Sound, and sank after limping into Port Gore in February 1986. All but one of the 743 on board survived.

An investigation was launched in January into whether luxury passenger ship Azamara Quest struck a rock in Tory Channel, after it reported a problem.

The Transport Accident Investigation Commission (TAIC) received an incident report that the ship struck Wheki Rock in Tory Channel on 27 January. The Commission said the investigation is still underway.

Mr Wijngaarden said the cruise ships would not be using Tory Channel, which is the thoroughfare used by the Cook Strait ferries, but the Sounds' northernmost entrance into Queen Charlotte Sound.

He said Ports of Marlborough has one harbour pilot and another in training. He said the manoeuvrability of today's large vessels meant Picton Harbour did not present any significant challenges.

"Accidents do happen and they're not something we can ignore - that would be foolish. We have a new port and harbour safety code, we've identified hazards and put controls in place to minimise those hazards," Mr Wijngaarden said.

He said all visiting vessels carried protection and indemnity insurance, but part experiences, including the Rena wreck off Tauranga, showed investigations into proof of liability can go on for many years before anything is dealt with.

"People can be assured there are measures in place that deal with prevention and investigation," Mr Wijngaarden said.