Rugby is a "moron's Mardi Gras", Foreskin shouts, "where they ask you 'whaddarya?' but really, really don't want to know".

Leap forward to 2016 and the Chiefs franchise is investigating allegations that players inappropriately touched and swore at a stripper hired for their end-of-season celebrations, while player Michael Allardice has apologised for shouting homophobic comments that same evening. 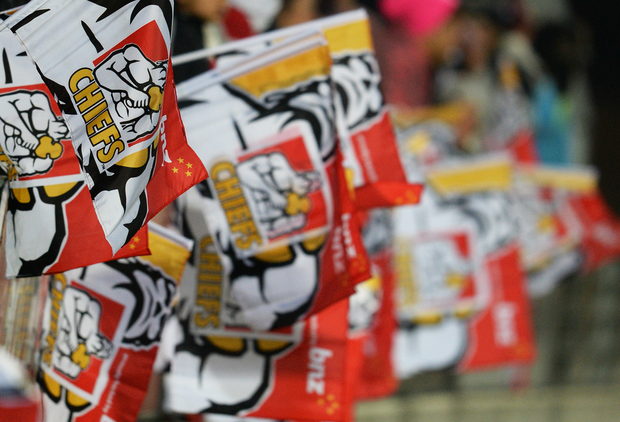 The Chiefs franchise is investigating the woman's claims she was touched inappropriately and sworn at while stripping at the end-of-season party. Photo: PHOTOSPORT

After first saying the woman's "standing in the community and culpability is not beyond reproach", franchise chief executive Andrew Flexman apologised himself earlier today, saying he regretted the way he had phrased his comments.

It would be easy to believe this week that nothing has changed since Foreskin's Lament was first performed.

In fact, the New Zealand Rugby Union (NZRU) - along with their counterparts in league, hockey, netball and football - have committed to implementing a set of guidelines to reduce discrimination in place by the end of the year.

NZRU chief executive Steve Tew is on record saying the country is ready for a gay All Black - after 1100 ostensibly straight men have already yanked on the black jersey.

So why then, is there still a nasty undercurrent that occasionally surfaces - not just in rugby, but in all sorts of team sports?

"One sociologist has coined a term called 'fratriarchy' as opposed to patriarchy... Fratriarchy is rule of the brothers. It's this idea that if you get a group of young men together - teenagers, men in their 20s - there's a competitive form of masculinity and they're performing for each other."

There might not be an intention to offend anyone, Dr Pringle said.

"[But] they're performing in a way to get status within that group. And obviously if you mix in alcohol then the performances can degenerate."

That 'fratriarchy' could exist among any group of young men, he said.

"I guess businessmen on a work function in a different environment, similar things can occur."

However, there was an extra element at play among elite sports players, he said.

"I think if you put people on a pedestal, and from a young age they're told they're special and given dispensations for various things... they do take [that] on board and in some circumstances, particularly with younger players, it can lead to problems."

Otago University sports management senior lecturer Sally Shaw said she was not convinced players had a sense of entitlement.

"I know, having spoken to people in these Super [Rugby] franchises that they do work really hard on the young men's social development as well."

But there was still a lot of hyper-masculinity within elite sport, Dr Shaw said.

"Sports are physical - they're about being bigger and stronger and tougher than your opponent and [about] competition. When those things are managed well they are great, but when they are not managed well or when they get out of hand, they often end in violence and abuse and these sorts of situations."

Professional sports teams in New Zealand were doing all they could to reduce instances of sexualised abuse and were starting to see improvements, she said.

"Sports are really recognising that they need to be inclusive, and that is a huge change.

"If you asked me 15 years ago if I thought I'd ever be sitting down with somebody from the NZRU having a conversation about homosexuality, homophobia and transphobia, I would've just laughed at you - but I have done."

In 2010, Canberra Raiders player Joel Monaghan asked to be released from his contract after a photo of a dog licking his genitals was published on social media.

And in 2012, the Australian Rugby League Commission called on teams to put an end to the tradition after a reporter said she was the target of vulgar sexual comments made by Canterbury Bulldogs players.

That request was ignored.

Here, Super Rugby franchises had "a pretty good handle" on players' drinking during the season, but perhaps needed to take a closer look at their own end-of-season celebrations, Dr Shaw said.

Richard Pringle said the fact the Chiefs incidents had even come to public attention, and that Michael Allardice had apologised, were positive steps in a way.

Greg McGee, for his part, said he believed things had got better since the liniment-scented days of Foreskin's Lament.

"Which is not to excuse the current players, but I think it probably has improved enormously ... and that's come with professionalism - they're being paid an enormous amount of money to pursue their rugby now."

It was that same wealth that he found most troubling about the Chiefs fracas, though, if the woman's claim she was not paid properly was true.

"These are rich, rich young men. For them to short-change this woman - that [would be] the cheapest shot of all."