Wellington's cats will not be chipped in the city council's proposed animal control bylaw, and with a curfew off the table, they will be able to roam the city all night long.

The council's recommendations stop short of compulsory microchipping but call for all cats to be identifiable within 18 months.

This comes after a fractious debate which divided cat fanciers and conservationists.

Environment committee hearings were marked by heckling, and in one case a man presented councillors with a photoshopped image of a cat hunting Gareth Morgan.

Geoff Simmons from the thinktank the Morgan Foundation said the council should have gone further to protect native wildlife from the city's estimated 20,000 - 30,000 domestic cats.

"Micro-chipping is the only reliable way of identifying cats," he said. "Collars can come off."

"These recommendations accept that we need to identify cats, but then they are chickening out of microchipping them, despite 89 percent of the public supporting the idea of compulsory microchipping."

Laura Bennett, who has two cats, said although a curfew would be hard to enforce, the benefits were worth it.

"Pets should be kept inside at night," she said. "I definitely believe in that."

"We do it with our cats and before we did it they'd just get into fights and bring in birds and mice and things like that," she said. 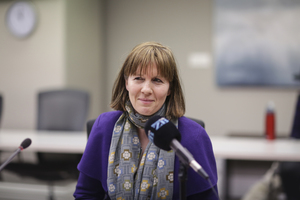 Council environment committee chair Iona Pannett said although there was support for the council to impose a curfew and restrict the number of cats per household in wildlife sensitive areas, that was beyond the scope of the bylaw.

"Legally we have no authority to manage wildlife and to protect it," she said.

"Our ability is to manage public nuisance and to put in the regulations around the keeping of animals."

"We need to be careful, we need the government to step in really and say 'this is what we need to do in terms of cats' and I'm sure that work will happen," Ms Pannett said.

Households would not be limited to three cats, and Ms Pannett said owners had until the end of 2017 to make sure their cats were readily identifiable.

"There will be mandatory identification, so either a collar or a microchip," she said.

"I will however be moving an amendment to say that it should be compulsory microchipping.

"It's essentially best practice, it's the safest for the cat and there's huge public support for such a move."

The new rules would also ban people from feeding animals, such as pigeons and stray cats, in public places - unless it was a designated place like a duck pond.

Dog owners would also now be able to go to cafes with their dog as long as it was not left unattended.

Off-leash exercise areas would be expanded, and if funding was approved the council would add more fences, poo-bag dispensers and rubbish bins in the areas.

There are other changes, too, such as needing council permission to keep more than 12 chickens, and a ban on roosters in urban areas.

And Ms Pannett said it was all for a good reason.

"We know that people love their animals so this policy is absolutely about maintaining their welfare," she said. "I do not want any harm to come [to them]."

"I'm a huge animal lover, I think we need to do far more to protect our pets - we hope to get that balance right in this policy."