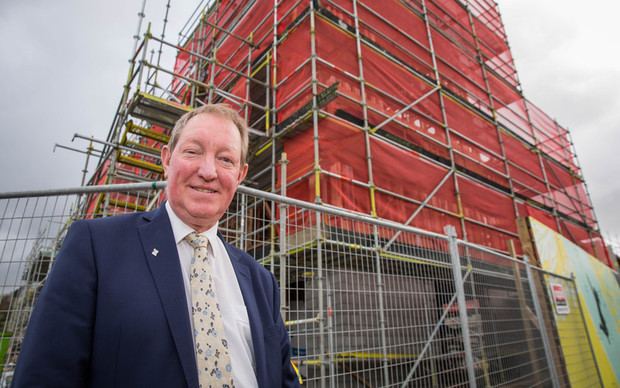 Nick Smith has confirmed the latest number of homes estimated to be built in Auckland is down on earlier predictions. Photo: RNZ / Claire Eastham-Farrelly

On Tuesday the government released its annual Construction Pipeline Report, outlining a building boom for the next six years, with Auckland leading the charge.

But the new figures show the number of homes estimated to be built in the city has been downgraded.

This year was expected to top the 13,500 homes mark - the estimated level needed for the next three decades if the city is to address its shortage.

But the report suggests a little less than 12,000 will be built.

Every year between 2015 and 2020 showed a higher prediction last year, by roughly 1000 dwellings.

On Tuesday when Mr Smith announced the boom, the fact Auckland's record levels were actually down on previous expectations wasn't mentioned.

RNZ put it to him then that they seemed less optimistic.

"Well the forecasts for Auckland are very strong and very optimistic.

"If you take them over the six years they're stronger than they were last year and my experience of the construction industry is that you cannot do more than about 20 to 25 percent growth per year. Last year we did 9500, this year they're picking 11,999 or 12,000 for common sense person language, I think that's about as hard as the accelerator can be pushed in getting new homes built," Mr Smith said on Tuesday.

Mr Smith has now confirmed they are down from previous forecasts.

"What the report shows at a national level is that they were very close to the mark. In Auckland the new forecasts show that the building booms is spread out over a longer number of years and are a bit shy in the years 2016 and 2017 as compared with the scale that they were expecting one year ago."

Mr Smith said he didn't control the forecasts as they were produced independently by BRANZ and Pacifecon, but said they were forecasts and were bound to fluctuate.

The decrease may be because construction had spread from Auckland, he said.

However Mr Smith said treating the lower estimates as a downgrade wasn't a fair reflection.

When asked if it was disappointing this year wasn't set to reach the required 13,500 level, as was anticipated in the 2015 report, he said he couldn't be disappointed by forecasts.

"What's important is actuals. What I'm finding hugely encouraging is that year on year, now into our fifth year, we are getting over 20 percent per annum growth in the amount of building activity.

Labour's spokesperson for finance Grant Robertson said the National Party was spinning the figures to try and convince people they were dealing with Auckland's housing woes.

"I think actually the whole Pipeline Project from the National Party has been a desperate attempt to try and look like they're doing something when in reality they're just falling further behind.

But Nick Smith said it was the longest and strongest building growth in Auckland's history.

"When we came to government we were only building ten houses per working day. That's been growing at a compound rate of more that 20 percent per year now for over four years. We're up to 40 houses per working day, we accept we need to get to 50, to 60. We can argue over the forecasts, we're just focussing on keeping our foot on the accelerator.

Mr Smith said the report was showing strong growth, but it was taking longer to get to the number of homes needed to get supply and demand in order.