Far North power generator Top Energy has turned down overseas offers to buy swamp kauri on its land near Kaikohe. 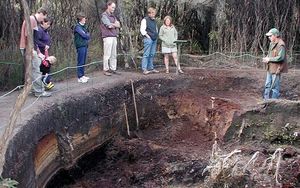 Instead it is moving to protect it.

Top Energy chief executive Russell Shaw said the company had been offered big sums for the kauri by Chinese interests but believed it was too precious to sell.

He said it was possible to walk around the partly buried forest, and pick up kauri leaves preserved for 2000 years - while the girth of the trees towered above humans.

Mr Shaw said Top Energy and the Far North Council were arranging permanent protection for the swamp kauri at Ngawha, and believed the geothermal area had excellent tourism potential.