A Christchurch man has been discharged without conviction in the first prosecution in New Zealand of someone for flying a drone. 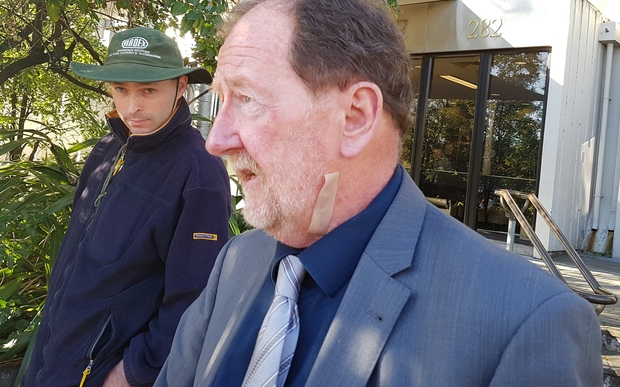 Defence counsel Rupert Glover, left, with his client, Simon Roy Reeve, who has been discharged without conviction for flying a drone without permission in controlled airspace. Photo: RNZ / Rachel Graham

In June, Simon Reeve was found guilty of three charges laid by the Civil Aviation Authority (CAA) after he flew a drone in controlled airspace without permission.

Today, in the Christchurch District Court, Judge Gary MacAskill discharged Mr Reeve without conviction, as long as he paid $1000 to a charity of his choice.

In January 2015, Mr Reeve had used his drone to film a fire at Pines Beach, north of Christchurch, while a helicopter fighting the fire was nearby.

He was found guilty of causing unnecessary endangerment and two charges of flying a drone in a controlled airspace without permission.

Judge MacAskill said the offending was at the lower end of the scale, and he was not convinced he needed to use this case to deter other offenders.

Mr Reeve told the court that although the drone flew around the smoke up to 1700ft away, he never lost sight of it and it was never near the helicopter.

At a judge-alone trial last month, Mr Reeve said he had read the disclaimer document which came with the drone and had a good understanding of aviation laws.

The CAA has tightened the rules for drones in recent years after a big jump in numbers, and a drop in prices.

Drone operators needed to think of others when their unit was in the sky, he said.

Mr Reeve's lawyer, Rupert Glover, agreed the publicity around the case would help others avoid his client's mistakes.

"It's given him what he describes as 18 months of sheer hell, and his mother's just said the same to me. They've gone through hell," he said.

"They're a Christian law-abiding family who've never done anything deliberately to upset anybody or infringe the rules of society, let alone the law of the land.

"They've gone through agonies about this and I'm just extremely relieved for them that it's turned out in an enlightened way."

Under the new CAA rules, drones are classified as unmanned aerial vehicles, and users have to have a safety plan in place and consent from the owners of property they are flying over.

Those who cannot get consent can still fly a drone if they have an operating certificate from the CAA.

Operators also need to have certification from the CAA if a drone is used at night, beyond the line of sight or above 120m.