A quest to find lost portraits by 19th-century artist Gottfried Lindauer has uncovered 12 paintings, including one that art experts never knew existed. 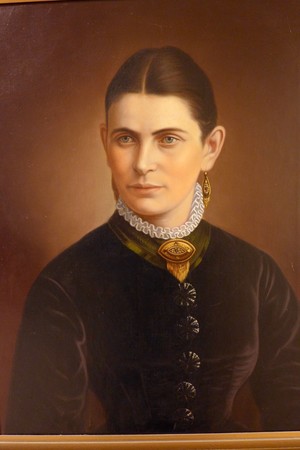 Auckland Art Gallery (Toi o Tāmaki) put the call out 10 days ago, asking people to check their attics, garages and under their beds for Lindauers as it worked to compile a new exhibition.

Now it has found a portrait of Miriam Antoinette Partridge - a Pākehā woman and the wife of one of Lindauer's biggest patrons, Henry Partridge.

Her great-great-great-granddaughter Jenny Long said the painting had always been in the family, and her mother called the gallery when they heard about its quest.

"We were quite excited... She rang me to tell me... she rang the gallery and said, yes, we have one and would they like to to talk to her."

The striking portrait shows Miriam Partridge in the fine detail for which Lindauer is known.

Her hair is pulled back into a bun and she wears a fitted black velvet bodice. There's a gold tasselled brooch on her collar, with matching earrings.

Mrs Long said there was a definite family resemblance

"It's a lovely likeness. She has the black hair and blue eyes - she has Irish ancestry - and that's been a family trait all the way through as well."

Henry Partridge commissioned many of the famous works of Māori that he eventually gave to the public of Auckland, but he also had his own family painted.

Toi o Tāmaki curator of Māori art Nigel Borrell was thrilled to have found the painting but its discovery brought with it a mystery - where is the one of Henry himself?

Mrs Long said elderly relatives told her the paintings of the couple used to sit side by side but have been separated and Henry must have headed to another branch of the family as the generations passed.

Mr Borrell said he would love to find it and still hoped more Lindauers would come to light. 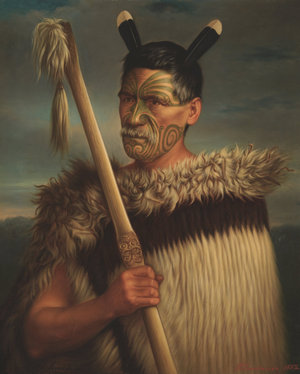 They have already found 11 more that they knew existed but could not locate as the result of their call last week and were following some promising leads.

But he also had to let down some hopeful callers who thought they may have had an original on their hands, he said.

"We always ask them to send an image in with their enquiry so we can ascertain whether it is an original or what we call a 'loving rendition' of the original."

If in doubt, they used infrared technology to spot tell tale Lindauer techniques below the painting's facade.

Mr Borrell said no matter what people had on their hands, the level of interest showed Lindauer remained relevant.

The Māori portrait gallery was the most talked about by visitors to Toi o Tāmaki whether they be from New Zealand or overseas,

Some of the newly-found paintings will be included in an exhibition at the gallery later this year.