Vincent Skeen appeared unemotional as the jury returned verdicts of not guilty of murder, but guilty of manslaughter.

In contrast, Luke Tipene's mother and other whanau wept and left court before Her Honour Justice Peters had a chance to thank them for their attendance.

The Crown said Skeen literally went for the jugular when he stabbed Mr Tipene at least seven times with a broken beer bottle after the pair were involved in a Grey Lynn street fight on Halloween night in 2014.

Skeen's lawyers said their client had acted impulsively and had no intention to kill Mr Tipene.

Outside court, Mr Tipene's uncle Sean Wilson said it was traumatic re-living the last moments of his nephew's life as they listened to the evidence.

"No one's the winner today. The message here is that you've got to take responsibility for your actions but the jury's made their decision and we've got to respect that decision," Mr Wilson said. 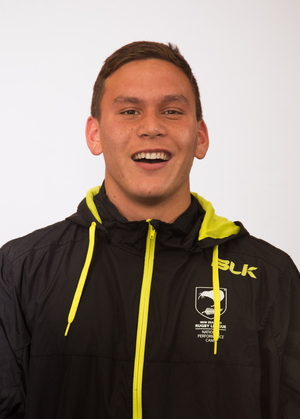 Mr Wilson said while the family was disappointed at the verdict, they were keen to concentrate on preserving the memory of Mr Tipene who was selected for the New Zealand Maori Under-17 rugby league side and was known for his kapa haka.

Mr Tipene had a promising rugby league career ahead of him. Educated at Nga Kakano o te Kaihanga Kura in Henderson, he was fluent in Te Reo and he played for the Glenora club in West Auckland.

He had been earmarked for the Auckland Warriors development squad.

The hooker or loose forward had also been named as the Auckland rugby leagues Under-17 player of the year after his Glenora Bears side won the under-17s premiership.

The jurors took five hours to return their verdicts. Skeen will be sentenced in August.

On Friday the jurors heard closing arguments from the Crown and defence.

But Mr Skeen's lawyers say he swung blindly and delivered a single blow with no intention to kill.

The Crown said Mr Skeen was angry and embarrassed when he was punched to the ground by Mr Tipene, a promising young rugby league player.

Mr Dickey told the jurors there was evidence Mr Skeen went behind a parked ute on the side of the road and smashed a beer bottle to fashion a weapon.

"Getting the better of the situation, having the advantage of a weapon and the extended reach by virtue of that weapon but also a lethal blade, he thrust it ... the shard of that weapon, deep into Mr Tipene's throat."

That was backed up by witnesses who watched the fight from a balcony and the pathology report which showed a catalogue of injuries on Mr Tipene's body, he said.

He said the wounds spoke for themselves and Mr Skeen's intentions.

"If we needed anything more at all, we could look at his words ... just after the event, he tells the ensemble, he announces - if you like: 'I've just stabbed the ****', there's no suggestion of: 'I've just made a terrible mistake'."

Mr Dickey said even if they did not find Mr Skeen intended to murder, he knew that his actions could have led to Mr Tipene's death and went ahead anyway.

"The Crown says that's murder and needs to be called what it is. Yes, Vincent Skeen was a young man when this happened but that won't make what is murder not murder."

However, Mr Skeen's lawyer, Lorraine Smith, said her client had no intention to kill.

"When Vincent Skeen was 16 years old, he picked up a bottle and he hit another boy with it. That boy tragically died and this tragedy changed the lives of two families forever."

Ms Smith said her client had always accepted that what he had done was wrong.

But she said Mr Skeen never aimed at Mr Tipene's neck and the Crown had overstated the evidence.

"The other very realistic probability, or possibility, is that Vincent was swinging out blindly without any intent to connect with any particular part of the body. Please don't forget for a moment how fast this all happened."

She said Mr Skeen had been drinking and had been punched in the head so hard that one witness described him as being in la-la land.

Mrs Smith also reminded jurors about what Mr Skeen said to his friend, shortly after the stabbing.

She pointed to the inconsistent evidence from witnesses to the fight and reminded the jurors that they had to be sure beyond reasonable doubt, and if they were not they must find her client not guilty.