A Turk living in New Zealand says he hopes President Recep Tayyip Erdogan's government will listen to the complaints of those behind the failed coup. 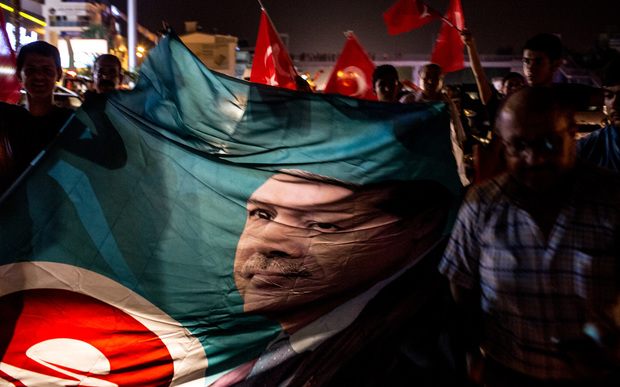 People take to the street in support of the president on Friday (Saturday NZT). Photo: AFP

The military coup attempt, which started on Friday (Saturday NZT), appeared to crumble after crowds answered the president's call to take to the streets to support him.

Gunfire and explosions had rocked both the main city, Istanbul, and the capital, Ankara, in a chaotic night, ending with mass casualties and arrests.

Lawmakers were left hiding in shelters inside the parliament building in the capital, which had been fired on by tanks.

Aucklander Nejat Kavvas has lived in New Zealand for 38 years. He said, while he was grateful the attempted coup fizzled out, there had been problems in Turkey.

"Turkey has never had [such an] experience of limitations of the freedom and democracy and the media controls and the control of the judiciary as Turkey's been experiencing now.

"It is rather sad that this happened, but I hope that the government or the state will take more notice."

Mr Kavvas pointed to the recent terror attack in Nice in France, and said he was worried about what appeared to be increasing instability around the world.

"People don't ask the very simple question: why are these things happening?" he said.

"I mean it's easy to blame a religion, a religious group, and so on, that's a cop-out."

Mr Kavvas' family in Turkey were all safe and the coup action had been reasonably isolated, he said.

New Zealander Yvette McCullough, who is living in Istanbul, said she sheltered at a friend's house during the coup, trying to monitor what's going on through local media.

Turkish Ambassador to New Zealand Damla Yeşim Say said yesterday that the coup attempt had been foiled by the people's solidarity with the democratically-elected government.

The coup was conducted by a "clique" within the armed forces, not the entire military, she said.

The Ministry of Foreign Affairs and Trade said yesterday afternoon that it was continuing to monitor the situation in Turkey.

A spokesman said 235 New Zealanders were registered as being in Turkey and none were known to have been harmed.

The situation remained fluid and the ministry was advising anyone there to stay indoors and avoid unnecessary travel.

The travel advisory for Turkey had been upgraded and the ministry was advising against all non-essential travel to the country.