A New Zealander living in Istanbul, Yvette McCullough, says she was at a friend's house in the central city when they heard the bridges over the Bosphorus, which separated the two sides of Istanbul, had been closed. 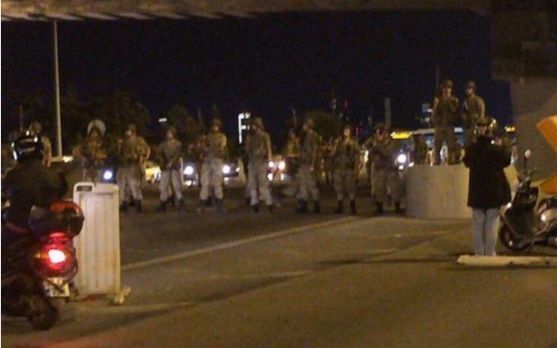 Turkish soldiers block both bridges on the Bosphorous in Instanbul. Photo: Twitter: @ibtwtr

She was "pretty shaken", she said.

"We had heard that there was going to be more of a military presence this weekend, but I thought that was more of a terror threat kind of thing - this has really come as a shock."

She and her friends had gone out briefly to get water and other supplies and were now sheltering inside, trying to monitor what was going on through local media.

"You can still hear helicopters overhead and I've got friends in other suburbs who are messaging saying they can hear gunfire.

"We're all sitting here with half-charged phones, not knowing what may happen."

Information about what was happening was confusing and was being drip-fed, Ms McCullough said.

"We were watching the local news here and they announced that the military were in control and that it's martial law.

"[I'm] unsure if they said that under duress or if that's actually the case but we're definitely staying indoors and not taking chances with that."

The Ministry of Foreign Affairs has told New Zealanders in Turkey to stay indoors while the situation there unfolds.

It said 202 New Zealanders had registered on its SafeTravel website as being in Turkey.

Staff were monitoring the situation and in the meantime New Zealanders should stay in their homes or accommodation, it said.

Travellers and expats should also monitor local media to stay up to date with developments and let family in New Zealand know they were safe.

#Kiwis in #Turkey please phone home to let family and friends know you are OK. pic.twitter.com/qGk63Arxt0

Any New Zealanders not already registered on SafeTravel as being in Turkey should do so, it said.