A research team working on a world-first breeding of New Zealand scampi has marked a special milestone. 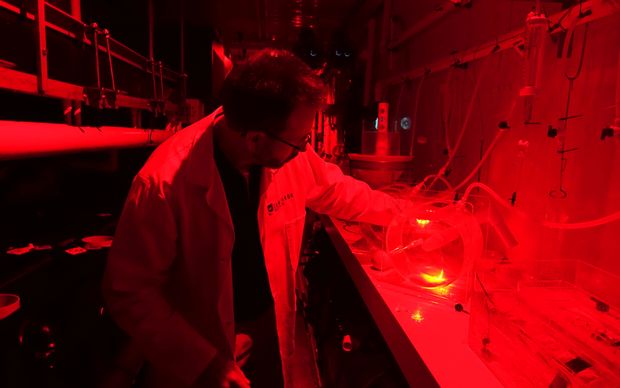 Camilla’s creator Kevin Heasman in the hatchery where the scampi are being nurtured in specially created tanks. Photo: RNZ / Tracy Neal

The team at the Cawthron Aquaculture Park in north Nelson said Camilla the deep-sea scampi had achieved what no other New Zealand scampi had so far - she had survived in an artificial environment.

At one year old, Camilla is the oldest living hatchery-raised New Zealand scampi, and yesterday there was cake and singing to mark the event.

She is named after the Duchess of Cornwall who visited Nelson last year with Prince Charles. Aquaculture scientist Kevin Heasman said when the Prince visited the Cawthron facility, it "seemed appropriate to name our eldest larvae after his nearest and dearest".

Camilla's home in a laboratory is flooded in eerie red light, allowing scientists to see her.

"To them they're in the dark, but to us it's light enough to work."

The scampi research programme has been going for two years. Mr Heasman said they had already learned a great deal about a largely unknown creature.

Camilla is only four centimetres long, but she was taking New Zealand a step closer to establishing a scampi aquaculture sector, Mr Heasman said.

"This little scampi represents a huge amount of science, and science achievement.

"Some people work on a species for years and never get past the larvae stage, and we got the larvae through in the first year."

Mr Heasman said even the tank she was being raised in had been specially created by the Cawthron, for optimal conditions that replicated the deep-water habitat of scampi. 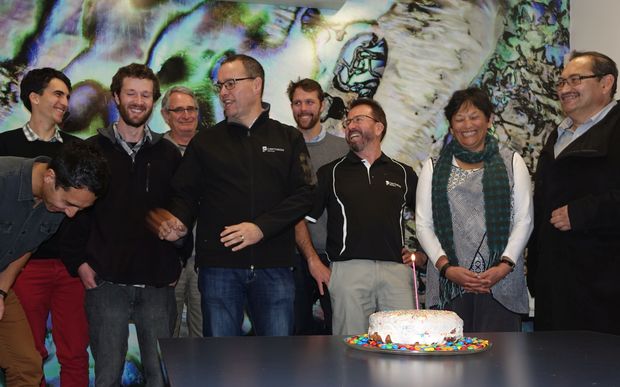 He said to have the larvae and be able to grow it to the small adult stage was "really significant".

The brood stock for the research came from 350m-deep waters off the Chatham Rise.

In overseas fisheries, scampi is trawled from the ocean depths and the scientists here are also seeking a better method for the industry.

Mr Heasman said that included new methods around farming them.

"The whole objective of this exercise here is to try and close the (breeding) cycle so we get females; get the eggs from them, hatch them, grow them back up into parents and get eggs from them.

The Cawthron is working with the Picton-based Waikawa Fishing Company, which started the project, and is backed by the Ministry of Business Innovation and Employment which has given $1.5 million a year over six years.

Waikawa director Geoffrey Connor said progress had been quicker than expected, and they had a clear goal in mind.

"The ultimate aim for us is to have farms set up in New Zealand, and to be able to export the product live, and for New Zealanders to get to know this product which is caught in New Zealand, but not many people know about it."

Mr Heasman said there was still a long way to go, but there was huge potential for scampi.