A woman borrowing money to stay in a motel says her family is being forced into homelessness by Work and Income. 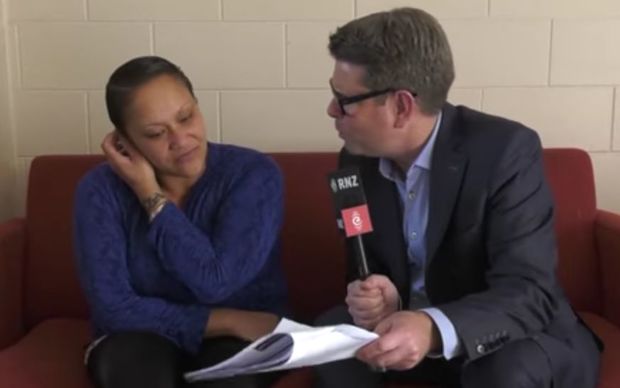 Tuaine Murray, speaking to RNZ host John Campbell, has been living in a motel with her family for two months. Photo: RNZ / Checkpoint

Tuaine Murray has been living in an Auckland motel with her partner and wheelchair-bound 12-year-old son for two months, while they wait for a Housing New Zealand house.

A scathing review of the emergency housing system last year found many people on benefits were falling into debt they could never repay, by borrowing government money to stay in motels.

Work and Income is now offering one week of free accommodation to those otherwise homeless.

But Ms Murray, who was $12,000 in debt to Work and Income, said the agency had told her it would no longer loan her the full amount of $1400 a week for her motel bill.

She would now have to pay $450 a week out of her benefit to live in the motel, which the family could not afford, she said.

Work and Income wanted to move the family into a private rental, but Ms Murray said she could not afford the rent, which would be between $400 and $600 a week.

She had been trying to get a Housing New Zealand house but, despite having a child in a wheelchair, had been waiting almost a year.

Family forced to sleep in car

Another woman, Nicole, who RNZ first spoke to in May, was still living in a motel with her three children, and said her motel bills had left her $8000 in debt to Work and Income.

Last week, she went back to extend her loan, and buy her family a few more weeks in the motel.

"They said there was a new change of law coming in on the 1 July, so that I would have to wait for that appointment. So that struck me with nowhere else to go," she said.

"I ended up sleeping in my car for one night until my appointment."

After that night in the car on 1 July, Nicole and her children went back to Work and Income, with the new policy now in effect.

Now, Work and Income was paying for her motel indefinitely. She did not have to pay them back, but had to prove she was actively looking for housing by showing at least three applications, and rejections, each week.

Nicole said the private market was tough to get into if you were a single beneficiary mother of three, and she said she had applied for five houses a week since April.

On Tuesday, she was going to view a Housing New Zealand house but said, if for any reason she turned it down, she would be off the waiting list for a year, and her motel bill would again become a loan.

"My older one that's in school, he keeps asking, why do we have to keep moving? And I don't know what to say.

"I tell him that things will get better and I need to be tough for them. Because there's no one else there for them," she said.

In a statement. the Ministry of Social Development addressed both cases.

Its deputy chief executive for social housing, Carl Crafar, said Ms Murray had agreed to direct part of her benefit towards the accommodation, then changed her mind.

Mr Crafar said Work and Income would always suggest private rentals, but Ms Murray had shown no willingness to consider anything but social housing.

"We'd encourage anyone with a housing need to look at all options rather than limiting themselves to social housing. There's financial help available through Work and Income for securing a private rental."

With regards to Nicole, Mr Crafar said there had been a miscommunication between staff and the motel, which was why the night of 30 June was not paid for.

"While we would have been able to help if (she) had come and seen us, we have apologised to her."

The ministry had also just paid for her next seven days at the motel, he said.