Social Housing Minister Paula Bennett says it is acceptable that the government is relying on a marae to help it support the homeless.

Ms Bennett had a brief tour of Te Puea Marae in the Auckland suburb of Mangere today.

The marae began offering shelter to the homeless last month and has since launched a support programme, Manaaki Tangata, for those looking for help.

The minister talked to one of the families staying there until temporary accommodation could be found, and said the marae is an important support for them.

The government has been criticised over how it has responded to growing concerns over homelessness, with Labour Party leader Andrew Little saying Te Puea marae was doing a great job but it should be the government solving the problem.

But Ms Bennett said the charitable venture is not a sign that the housing safety net has failed. She said the work of the marae, which her staff was supporting, was another way to help homeless people back into housing.

Ms Bennett said she had been unable to visit the marae previously because she has been busy getting services into the marae and working on the pipeline of more permanent housing solutions.

"In a tight housing market it's those that are most vulnerable that are affected the most. But to say that we're late to the party, that we don't care and that we haven't done anything is just simply incorrect."

But Mr Little said that was not good enough. He said Ms Bennett should have visited the marae sooner, and must act faster to get people permanent homes.

"She spent last week running and hiding from the issue and from Te Puea, so good that she's turned up in the end.

"So the real challenge for her is to get off her chuff and do something, and get them into houses."

Mr Little said there are 30 children at the marae, and they need stability. 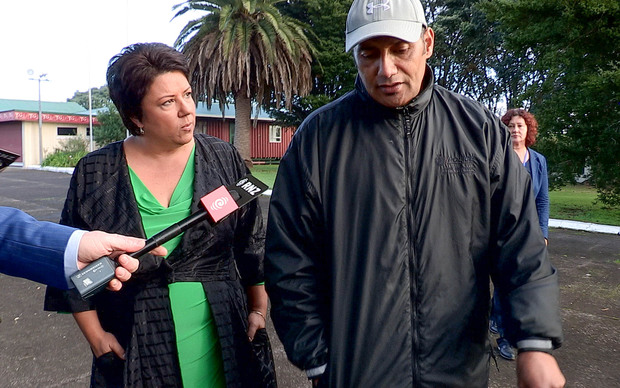 "We're not here to show anybody up, we're not here to kick anybody around. But what we are here to do, and we've been quite clear from the start, it's about winter time, getting whanau - particularly our kids - out of the cars and into some place warm, something better than a car."

Mr Dennis said Ms Bennett talked to one of the parents staying at the marae, and to social workers. He said the government was working on transition accommodation to reduce the amount of time people need to stay at the marae.

Dozens of families have made the marae their temporary home, with at least 54 families having sought shelter there.

Those who have came to the marae included families who had been staying in cars with children as young as two weeks old.

An 11-year-old girl told RNZ's Checkpoint that before living at the marae, her mother, father and five siblings had been living in their van since February.

Ms Bennett said 120 new beds a year have been made available in emergency housing shelters.