Employers are being recognised for paying staff the 'living wage' including one who had in the past struggled on the minimum wage. 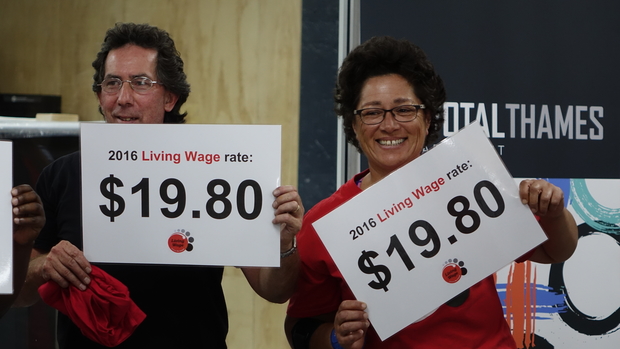 The Living Wage Movement has released a list of 58 companies and groups it says are committed to paying employees an hourly rate of $19.80 or more, which it says is enough to afford a decent standard of living.

It comes as new figures this week on the gap between the rich and poor.

Wellington security worker Greg Kane hopes he will soon be getting the 'living wage'.

Mr Kane said he was still struggling to provide for his family.

"There is also weeks where we can't buy food because of money. We have to go without."

Mr Kane is employed by security firm Recon, which is contracted to Wellington City Council.

He is part of a mobile patrol team which checks council buildings and enforces noise control.

The work was hard and he was often abused, he said, but he still did not earn enough money in his 44 hours a week with that job and had to pick up other casual work.

"For the past five days, I've lived on just under four hours sleep. I'm in default in some of my house commitments and on deadline to meet them, so I have to try to do everything so we still have a roof over our head and we don't lose everything."

The Council offers directly-employed staff the living wage of $18.55, and last year voted to extend it to staff from third-party contractors doing security and cleaning work.

But a spokesperson said it was still negotiating these conditions.

A business owner who has got behind the living wage is Jo Luxton, co-owner of Ashburton early childhood centre Headstart.

"I've been in a situation before, where I've been a single parent and any minimum wage is really tough.

"It doesn't really cut it. When the opportunity came to me to pay my staff and any future staff the living wage, I took it. "

Ponsonby Road Bar in Rotorua another of the companies being recognised.

Employee Kristine Knap, 46, said she had lived week-to- week on minimum wage in the past and the increase had taken the strain off life.

"You can actually live without having scrimp and save week to week. I live on my own ... I can pay my rent, my power, have food and gas in my car every week and then save some as well."

Bar co-owner and former Labour candidate Tamati Coffey said while it might cost him more each week the benefits had been huge.

"The mood of the staff has just been incredible. They have a heightened sense of value. They walk in and skip into work.

"It's just such a noticeable difference among the staff that they are suddenly being valued for the work that they do."

"We'll probably be able to spend a bit of family time. We'll be able to go and pay our medical bills, live, be able to have the essential foods.

"Having that extra income will allow for a lot more to happen."