A puppy found abandoned in an Auckland rubbish bin will be put down if it is found to be part-pitbull, despite numerous adoption offers. 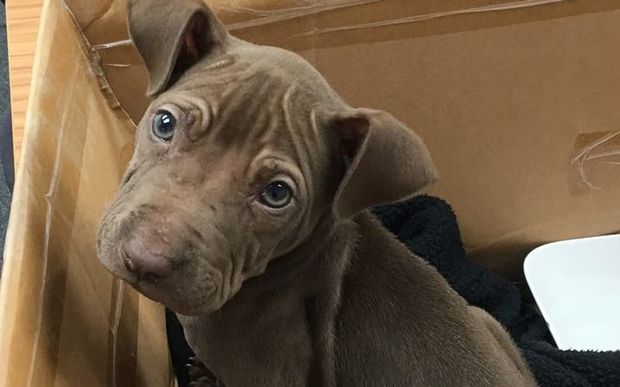 He handed it over to an Auckland Council-run animal shelter, but said he did not know if Chip was still alive because the shelter would not let him see the puppy.

If he had known the shelter put down pitbulls, he would never have called it, he said.

Mr Robins has since started a Facebook page and a 'Save Chip' petition, which has nearly 10,000 supporters and many offers to adopt.

"My number one aim is to get Chip out and into a loving family. It's got to the point where it's gotten so big, it's not just about Chip anymore, it's about saving these other dogs as well."

Auckland Council animal management unit spokesperson Geoff Keber said it was too early to determine Chip's breed, because he was too young and in bad health.

He confirmed the puppy would be put down if it was found to be a pitbull.

It was council policy not to adopt out pitbull-type dogs because they were considered more dangerous than other breeds, he said.

Mr Robins, however, said the guidelines on putting down dogs classified as menacing should be changed.

Meanwhile, the council's offer of free registration for menacing breeds has had a response five times bigger than expected.

Since April, the council has waived its registration fee on dogs considered dangerous and will neuter and microchip them - and throw in a muzzle - for $25.

The amnesty period ends on Friday, when animal control will launch a city-wide crackdown on the breeds.

Mr Keber said the number of sign-ups had far exceeded expectations, and the council now had a waiting list for dogs to be desexed.