Disability advocates are urging people to boycott the film Me Before You because of the way it depicts someone who is paralysed. 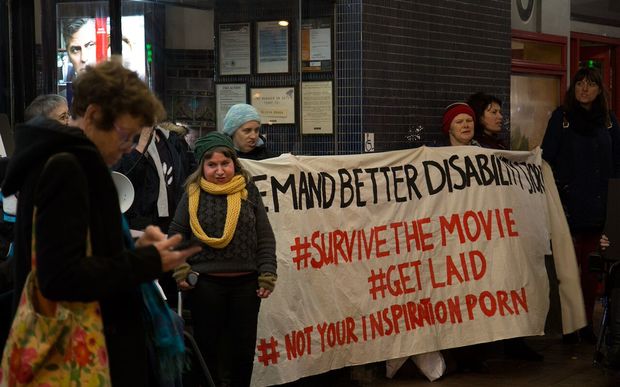 The British film, which is released in New Zealand today, features a man who is suicidal because he has been left paralysed after an accident.

More than 20 people protested outside an early screening of the film at the Embassy Theatre in central Wellington last night, chanting "assistance to live, not assistance to die" and "tell sad stories about your own lives".

"We've seen this story so many times and we're sick of people doing anything they can to not be disabled - and that includes killing themselves - or just serving as a plot point to help other people," she said.

She pointed to the Game of Thrones character Tyrion Lannister as a positive depiction of someone with a disability.

"He's an amazing depiction of a disabled person but it's such a rare example. Usually disabled people are chipper and try to inspire those around them, while Tyrion is not a role model but a person who has his own problems but carries on living his life."

In Me Before You,the male protagonist, who is played by a non-disabled actor, is a banker who has acquired a great deal of wealth.

"One of the key things is not only is he disabled but he's a millionaire with a six-pack who is dating the Mother of Dragons," said another organiser, Paula Booth.

"To see someone who lives such a flash lifestyle still want to die is really gutting. Most disabled people could never dream of those kinds of opportunities, and yet we still manage to find enough happiness and purpose in life." 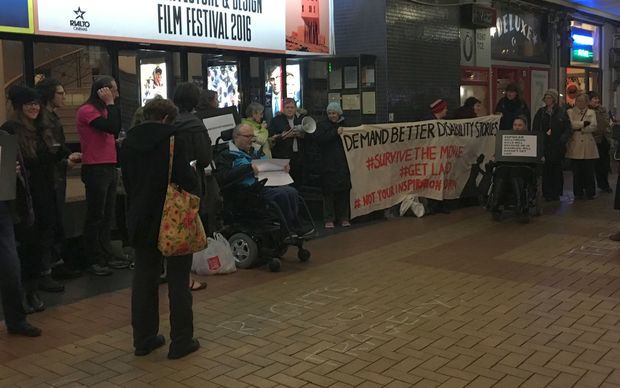 People outside the Embassy Theatre in Wellington protest the movie ‘Me Before You’. Photo: Paula Booth

The group Not Dead Yet Aotearoa also criticised Hollywood for "tired old stereotypes that exist only in overwrought imaginations".

"For far too long we've had to listen to virtually everyone without a disability write novels or movie scripts or act out sad old variations on the theme of just how dire and doom-laden our lives are," said a spokesperson, Wendi Wicks.

"In this nightmare, we're better off dead, because no-one could possibly contemplate living a disabled life when we are so patently suffering unendurable horrors."

Responding to the criticism in The Guardian, the film's director Thea Sharrock said people were misunderstanding the film's message.

"It's a fictional story about how important the right to choose is. The message of the film is to live boldly, push yourself, don't settle," she said.