Playing down the threat of substandard steel that made it past controls and into New Zealand roads, bridges and buildings is reckless of the government, says an international steel trader. 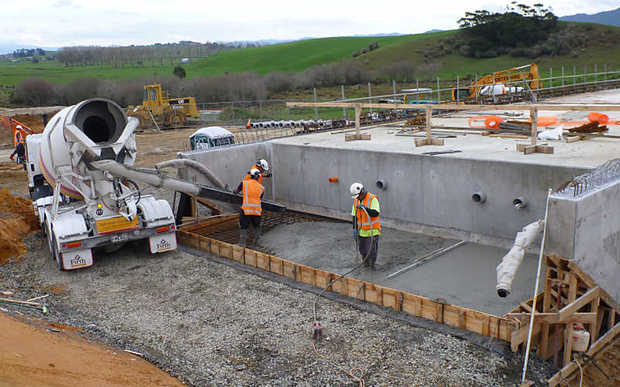 Fulton Hogan and HEB Construction chose a cheap bid by Steel and Tube to import 1600 tonnes for new bridges on the Huntly Bypass, and ended up with Chinese test certificates that proved worthless.

Ian Jacob - who has been sourcing steel from China for two decades, said the contractors knew the risks in a glutted world steel market.

Mr Jacob is a shareholder in Mill-Pro Hong Kong, a business that has supplied fabricated structural steel to companies in Australasia for 10 years.

He told RNZ News the contractors had been "wilfully blind".

"If this is what they're doing on a State Highway project, you can imagine what's going on in the private sector," said Mr Jacob.

Fulton Hogan and HEB, who are among the biggest New Zealand road builders, used the substandard steel after running out of time on the Huntly project. The steel was strengthened with extra concrete, using hurriedly revamped designs.

Steel and Tube are now being asked by the contractors to go back into the market to get replacement steel tubes to hold up the remaining two bridges.

Mr Jacob said he did business with such companies, but was prepared to risk that to speak out, because the situation could not continue.

Transport Minister Simon Bridges yesterday ruled out any government investigation, saying it was a small batch of steel from China and it was very unlikely to happen again.

"Frankly, that's quite reckless honestly to say that, because how does he know anything about the steel industry whatsoever and where's that information coming from?

"I could spend half an hour with him and take him through some of the things that we have seen in the last 25 years of sourcing (steel). I think it would make the hairs on the back of his neck stand up."

But no official or agency from New Zealand had ever sat down with him to discuss the issue.

Mr Jacob said that was because it had been possible to ignore this.

"I believe 95 percent of the issues that are not compliant with specifications, are being installed undetected in buildings, in bridges, in products that are coming into the country. This would be my typical experience."

Mr Jacob provided RNZ News with multiple examples of major projects with question marks over the steel, which RNZ News will check in coming days.

He said there was a "litany" of these kind of failures in Australia and New Zealand more recently.

"It's a lack of testing in New Zealand, it's a lack of understanding how the cheating occurs and how to actually prevent it."

New Zealand is now ramping up its infrastructure building, and industry players have told RNZ Asian steel makers could take advantage of that due to tariff concessions here.

The concessions mean the makers can not be accused of dumping cheap steel here in contravention of trade rules.

Mr Jacob said things would get worse unless mandatory random testing of all steel was introduced.

He said the lure was the 5-10 percent savings contractors could make by buying hundreds of millions of dollars of steel from cheap, badly run factories, as opposed to quality operators in China.

Another key factor in New Zealand was naivety, according to Mr Jacob. He said it set New Zealand apart from the likes of Hong Kong, which understood the market and designed regulatory controls to corral the danger.

"New Zealand tops out as a non-corrupt country. We just don't conceptually perceive the lengths people are prepared to go to. There is just no understanding of what's actually going on in terms of supply chain and sourcing.

"The preparation of samples that are not representative of the product supplied is common out of all low-cost countries. You pre-prepare samples that do comply, in order to get certification. They frequently do not reflect what is actually delivered to site.

"What typically happens, they will get (test) certificates from a steel mill. They probably won't even test the steel, but (otherwise) some of the steel may not pass testing. In which case individuals - it's well known and I've seen it happen before - will forge test certificates to make them pass."

It was not a case of Chinese corporations setting out to cheat, he said.

"You've got individuals that make these decisions that don't know or don't care. Typically, it's more lack of knowledge than malice."

He said cheating had reached a point that his company would not even send an accredited lab inspector into a factory, unless one of their own people was with that person.

Meanwhile, international testing authorities alarmed at being implicated in the Huntly highway steel failures were moving to investigate them.

This comes after after Steel and Tube claimed that some of the tests on the 1600 tonnes of substandard steel were done by an ILAC-accredited lab.

Steel and Tube has refused to tell RNZ News the name of that ILAC accredited lab, citing commercial sensitivity.

IANZ said it sincerely hoped Steel and Tube would cooperate with the testing watchdogs' investigation.