The Auckland businessman who threatened to spike infant milk formula with 1080 poison has admitted charges relating to buckets of illegal party pills. 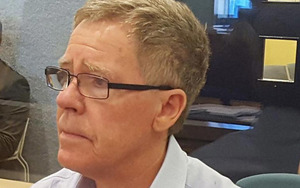 Jeremy Hamish Kerr is serving a prison sentence of eight and-a-half years for blackmail after sending anonymous letters to dairy giant Fonterra and Federated Farmers in November 2014, in the hope the government would ban 1080.

He was back at the High Court in Auckland this morning where he admitted five charges - one of selling the illegal pills and four of possession for supply.

Kerr was caught in a police surveillance operation.

Officers watched as Kerr met with their target at a cafe in South Auckland. They then followed him to a public storage unit in East Tamaki.

They later carried out secret searches of the storage unit where they found a variety of pills, powders and pill pressing equipment.

They also found buckets of powder, containing BZP and TFMPP - which when combined has similar effects as MDMA or ecstasy.

Kerr later told police he was only getting $2 a pill, because he'd had the BZP since before 2005 when it was outlawed and it would now be "low strength".

Kerr will be sentenced on the drugs charges next month.

His drugs charges had been suppressed until now.

In the Auckland District Court in 2012, Judge Cunningham granted Kerr name suppression, and said because of his reputation as a reputable businessman, he was unlikely to reoffend.

However, he did just that.

While these charges were before the court, Kerr sent the blackmail letters to Fonterra and Federated Farmers.

At sentencing for the blackmail charges in March this year, Justice Venning noted that Kerr manufactured an alternative to 1080 poison and financial gain was the motivation behind the blackmail.

The cost of the 1080 investigation to agencies was in the order of $37 million and Justice Venning said it could have had a catastrophic effect on the New Zealand export industry.