A public register of company ownership which includes foreign beneficiaries is being looked at by the government, as part of its commitment to combating global bribery and corruption.

New Zealand has made a number of commitments at the Anti-Corruption Summit in London this week.

Police Minister Judith Collins - who has been at the summit - said key initiatives will see New Zealand nominate someone to the International Anti-Corruption Co-ordination Centre, and explore establishing a public central register of company beneficial ownership information.

Business New Zealand said a public register was important to make sure people were being taxed correctly.

Its chief executive, Kirk Hope, said the register would help fill in the gaps in the current system.

Identifying beneficial owners could be a challenge but it would be made easier if it became a requirement before registering a company, he said.

"It might require some additional administrative matters which would be a negative, but nevertheless it's a pretty minor negative in the scheme of things," Mr Hope said.

Ms Collins said there was a big global problem with money syphoned off from things like aid programmes, and she did not want it ending up in this country. She wanted money that was productive and honest invested in New Zealand.

"The world has changed. And it has particularly changed around big money, around terrorism, around drug dealing, around major corruption, and it's the sort of area we always needs to be looking at changing, and I think it's something we should be looking at."

Ms Collins said the idea of a register would need a lot of work, and have to go through proper processes.

Ms Collins said New Zealand would also commit to denying entry to people involved in grand scale corruption and work with international sports bodies to develop a partnership for combating corruption in sport. 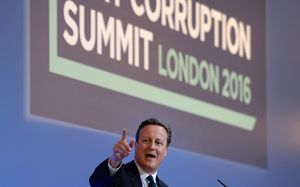 British Prime Minister David Cameron said the anti-corruption centre would bring together governments and law enforcement agencies from countries that had seen assets stolen, along with those where assets are hidden.

"What we're talking about is stopping the corrupt hiding their loot from the authorities, so, as John Kerry said, there are no more safe harbours for the corrupt. When people steal money from your country and hide it in mine, we can expose them and return the money to you."

New Zealand will continue to ensure that law enforcement agencies have full and effective access to beneficial ownership information for companies and other legal entities of risk registered within their jurisdiction. New Zealand will also continue to implement bilateral arrangements that will ensure law enforcement in one partner country has full and effective access to the beneficial ownership information of companies incorporated in the other partner country.

New Zealand has implemented the FATF Recommendations on beneficial ownership to ensure that accurate and timely company beneficial ownership information is available and accessible to those who have a need for it and can prevent abuse. New Zealand will also explore how to appropriately incorporate the FATF standards on preventing money laundering in the non-financial professional services sector into domestic legislation.

New Zealand will continue and intensify efforts to develop procurement capability, including initiatives that safeguard integrity in the procurement process.

New Zealand has signed up to the Common Reporting Standard initiative.

2. Punish the corrupt and support those who have suffered from corruption

New Zealand will support the proposal to establish an International Anti-Corruption Law Enforcement Coordination Centre ('IACCC') by nominating a representative to the IACCC.

New Zealand will also, where appropriate under New Zealand law, deny entry to specific individuals who are identified as being involved in grand scale corruption.

New Zealand will explore establishing an accessible and central database of companies with final convictions for bribery and corruption offences, and ways of sharing information on corrupt bidders across borders.

New Zealand supports efforts to develop internationally-endorsed guidelines for the transparent and accountable management of returned stolen assets. New Zealand also supports the development of common principles governing the payment of compensation to countries affected by corruption, to ensure that such payments are made safely, fairly and in a transparent manner.

3. Drive out the culture of corruption, wherever it exists

New Zealand will work with international sports bodies to develop a partnership for combating corruption in sport.

New Zealand commits to working together to support efforts to implement the United Nations Convention Against Corruption including the voluntary provisions.