A Marlborough student's interpretation of one woman's war story was the winning ingredient in a national speech competition. 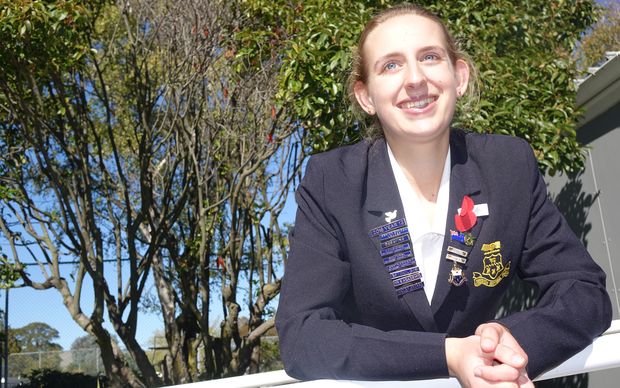 Stephanie Simpson, this year's winner of the 2016 ANZ RSA Cyril Bassett VC Speech Competition, said she will be delivering it in the safety of darkness at Gallipoli this morning.

"It's going to be pitch black and I'm going to be on these huge screens. Everybody will be able to see me, but I won't be able to see anyone, so I'm not quite so nervous. I'm ready, but not ready for it," Stephanie told RNZ just before leaving for Gallipoli.

The 18-year-old Marlborough Girls' College student impressed the judges with her passionate speech about the experiences of nurses on hospital ships - Evelyn Gertrude Brooke's in particular, who worked just kilometres from the frontlines at Gallipoli during World War I.

Miss Brooke, known as Eva, was born in New Plymouth, and by 1902 she was working as a nurse in Masterton. In 1904 she became a probationer at Wellington District Hospital, and when war broke out she was appointed second in charge of the nurses who sailed with the New Zealand Expeditionary Force to German Samoa in August 1914. She was then appointed matron in the New Zealand Army Nursing Service in April 1915, and then matron on the hospital ship Maheno which left for Turkey in July 1915.

Stephanie said she had always been interested in women's contribution to the war, which was how she discovered the story of Evelyn Brooke, but it was hard finding stories about the women's war effort.

"It's very much an emerging story. The hardest thing to find in my research were actual quotes from people because not many diaries were actually available to the public and if they are, they're difficult to access."

"I thought, 'wow', this woman's amazing. She's the most highly decorated nurse in New Zealand - the only person in New Zealand to get the Royal Red Cross twice, and I was very moved by her story.

"I thought what a strong woman - what a mana wahine she was, and I put that in my speech because she just touched my heart."

Stephanie's youth and her English roots were no barrier to her understanding of the cost to New Zealand from the Great War. She moved to Marlborough with her family about seven years ago.

She said her speech was motivated first by the women in her family currently working as nurses, along with relatives who served in the World Wars.

"I found that very moving and I guess Evelyn Gertrude Brooke symbolises all of the people in my family, and that's where my connection comes from." 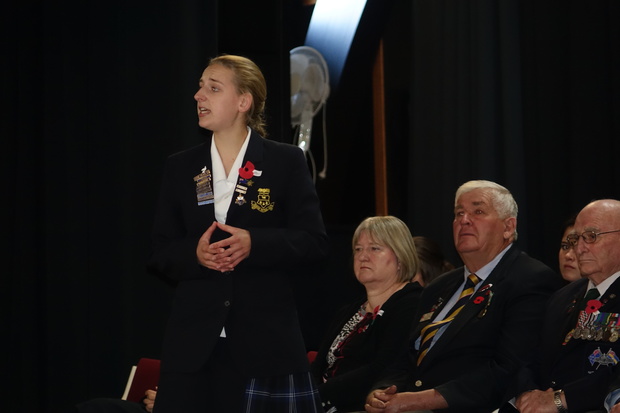 The story of Evelyn Brooke, who was the only person in New Zealand to get the Royal Red Cross twice, stood out, said Stephanie Simpson. Photo: RNZ / Tracy Neal

Stephanie said she was surprised by Miss Brooke's dedication to the men she didn't know, but for whom she would have laid down her life.

"Men fighting against the odds - at Gallipoli there was very little chance of survival. It was her commitment, and the commitment from the other nurses. They vowed they'd go down with the ships if they were to sink. They would never have left the men who couldn't walk."

Stephanie said she was also motivated by the fading impact of the war on today's youth, and the thought of where she might have been 100 years ago, and how she might have reacted to having little control over her own destiny.

"Evelyn Brooke did this amazing thing, but hold on, could I have done the same? Would I have been able to commit myself in such a way that I was dedicated to these men that I was sewing up and caring for.

"The thing about Evelyn was that she wasn't just doing the sewing up - her main role was after they were mended, after they'd been operated on, and when they were in the recovery stage - the love that all of those nurses showed to those wounded men, they treated them as their husbands - their brothers, and that just amazed me."

Stephanie said she expected the trip to Gallipoli to be a sobering and humbling experience.

"It's important for me that I get it right for all of the men and women that have given up so much for us."

She wanted to help young people who listened to her speech, connect with the war and what it meant.

"There is never a time to stop commemorating what these people did."

Stephanie will be delivering her speech at 11.30pm local time (8am NZT).