Police are likely to spend the rest of the week at Kokiri Crescent in Porirua, where a gunman was found dead yesterday after a 24-hour siege. 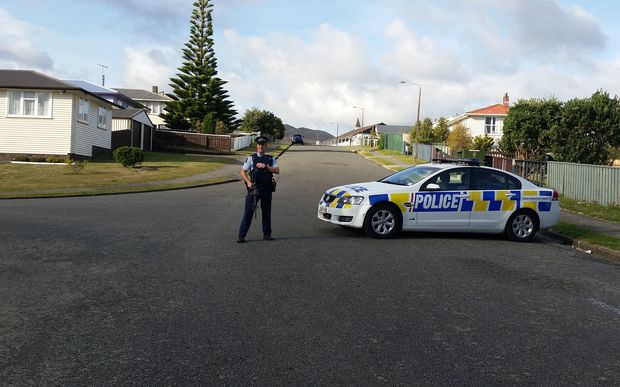 Police continue to stand guard in the area on the second day of the stand-off. Photo: RNZ / Tiana Barns

Their focus will be on two houses: one where the gunman shot dead a police dog and a police officer had to jump from a second storey window to escape, and the other where the man holed up and later died.

Police had been negotiating with the man, believed to be 29-year-old Pita Rangi Tekira, during most of the siege, but said he had stopped communicating just before midnight on Friday.

Speaking at a media conference on Saturday afternoon, Wellington District Commander Sam Hoyle said most residents would soon be able to go back home.

"The cordons will shrink back as we examine the ground around those two houses. I think it's likely we'll be at those houses for some days though."

Mr Hoyle said Mr Tekira had been staying at the second house in the days before the siege and police had spoken to the owners of that property.

They had used tear gas on Friday night to try to get him to come out, but no shots had been fired by police, he said.

"I can confirm that about 11am we entered the property in Kokiri Crescent, and there located the deceased who we believe to be Mr Pita Rangi Tekira.

"He was alone in that room and there was a firearm present in that room with him. I can't speak to the cause of his death - that's a matter we will report to the coroner."