The lawyer for a 16-year-old Sydney boy charged over an alleged Anzac Day terror plot has told Parramatta Children's Court his client is pleading not guilty to the charge.

The teenager is charged with planning or preparing to commit a terrorist act by trying to obtain a gun.

The boy was arrested on Sunday near his home in Auburn in Sydney's west, after an investigation by officers attached to Operation Vianden.

Australian police sources told the ABC they arrested the young apprentice electrician near his Auburn home in western Sydney on Sunday afternoon, just hours after he allegedly sent messages on an encrypted mobile app to try to obtain a gun.

The messages did not disclose a specific location or time but mentioned April 25. 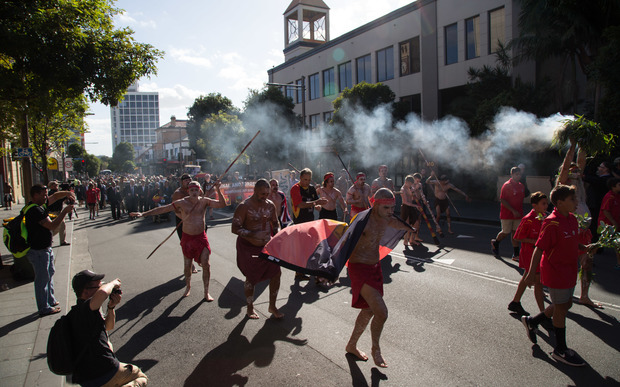 Police told ABC programme 7.30 the boy first came on their radar last May as part of their investigation into a Melbourne terrorism plot, which was foiled on the eve of Mother's Day.

Police investigating overseas links to the Mother's Day plot say they found communications online between the Sydney boy and senior Australian Islamic State (IS) recruiter Neil Prakash, who had already allegedly been involved in a separate Anzac Day terrorism plot weeks earlier from the war zone in Syria and Iraq.

Counter-terrorism sources told 7.30 they also discovered communications between the teenager and a younger Sydney boy who has since been charged under Operation Appleby with preparing a terrorist attack, along with four alleged members of a terrorism cell.

Police raided the 16-year-old's home last year and when they told his moderate parents of the communications, they signed him up for a secret and intensive new intervention programme run by the AFP, NSW Police and Victorian Police, which was using mentors, psychologists, religious leaders, teachers and work placements to try to steer a handful of young extremists away from IS.

The programme targets young people who are no longer the targets of police or ASIO investigations and are considered open to diversion strategies.

The boy's father, a second-generation Australian of Lebanese heritage and not devout himself, started accompanying his son to mosques where sermons were held in English and pulled him out of school to start an apprenticeship, but police sources say the evidence suggests the intervention failed.

The boy's lawyer, Zemarai Khatiz, said his client would apply for bail today and defend the charges, claiming his communications were "taken out of context".

"He is a 16-year-old boy who has never been in police custody, or charged or in prison in the past, so it is extremely difficult for him," he said.

"The family is a very good family.

"They have been in this country for a very long time.

"My client doesn't have any criminal convictions also ... the family is devastated."