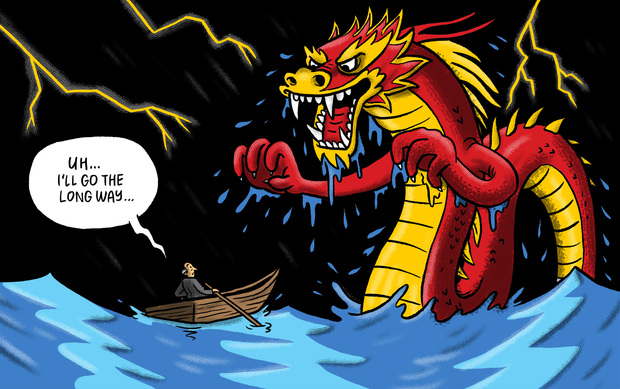 What has New Zealand got to do with the South China Sea?

The Chinese official news agency Xinhua welcomed John Key to Beijing with a commentary chiding the prime minister, who travelled to China seeking an upgrade in the countries' free trade agreement, for recent NZ participation in military exercises hosted by Malaysia in the South China Sea, as well as remarks about Chinese militarisation in the highly contested body of water south of China.

The South China Sea is a body of water south of China? Incredible.

What about the disappearing articles?

We'll get to that later.

How severe was this commentary?

A taste: "Key should be reminded that New Zealand is an absolute outsider in the dispute and not a concerned party, and that any attempt by Wellington to break its promise not to take sides on the issue would risk complicating the flourishing trade ties between China and New Zealand. Wellington is advised to be more discreet in its words and actions. New Zealand should chart its own course in its relations with China rather than have its agenda hijacked by the ambitions of its military allies. The future of bilateral ties between New Zealand and China, to some extent, depends on Wellington itself."

"Mind your own, mate. Stay out of it, like you said you bloody would. Did Sam put you up to this? He did, didn't he? He's not your mate, mate; we're your mate. Unless you don't want to be mates any more. Is that what you're saying?"

That's just one "commentary", though.

There's in fact another in the English-language Chinese newspaper Global Times, which describes the concerns of "experts" about the involvement of NZ and Australia in military exercises in the Sea. "By inviting Australia and New Zealand to visit China in succession, China sent a strong signal that it doesn't want external countries to follow the US and take aim at it in the South China Sea," it explains.

Both Xinhua and papers such as the Global Times are routinely described as government "mouthpieces".

Interesting. Is there an equivalent NZ state mouthpiece?

Mike's Minute is an independent opinion segment, if that's what you're getting at.

Thinking more, actually, of the publicly owned RNZ. Is RNZ, including its award-nominated animated question and answer feature, a mouthpiece of the government?

Isn't that what you'd say if you were a mouthpiece of the government?

Yes. Can we get back to China?

Yes. What is afoot in the South China Sea?

For many decades the sea and the island groups within it have been hotly disputed, but the last few years have seen tensions escalate.

What are the rival claims?

Their claim is pretty much the same as China's. But it's complicated.

That seems like a lot that China is claiming.

It is. Citing decades-old cartography - disputed by rivals - Beijing insists it is entitled to an area contained by a "nine-dash line". Vietnam calls it the "cow's tongue".

Why is the South China Sea so important?

It is the site of historical rivalry, competition for resources, and a crucial conduit of global commerce: about 30 percent of global trade travels through the South China Sea, worth about $5 trillion every year.

And how are things escalating?

China has in recent years embarked upon what has been called a "massive island-building spree", enlarging rocks and reefs that peek out of the sea at low-tide. In just the last few days, the Chinese navy has "conducted training drills with upgraded methods that resemble actual combat conditions", according to official media. This comes as the US and China, the world's greatest superpowers, examine the whites of one another's eyes in the region.

Wait. The US have a claim in the South China Sea too?

Not directly, but in response to Chinese militarisation and as part of a geopolitical "pivot" towards the Asia-Pacific, the US has been active in the region, with defence secretary Ash Carter visiting aircraft carriers and signing new military agreements with India and the Philippines, the latter including joint patrols in the South China Sea. The Chinese Defence Ministry has responded by saying the US is displaying a "cold war mentality", reports Xinhua, and it would "resolutely defend China's territorial sovereignty and maritime interests". China has previously said the US establishing bases in the Philippines threatened to "make the Asia-Pacific a second Middle East".

Gulp. Isn't there some kind of international court that can sort all this out?

There is one important case under way. The Philippines is arguing before the Permanent Court of Arbitration at the Hague that China's claim to an uninhabited rock, Itu Aba, is illegal under the UN Convention of the Law of the Sea; if the court agrees, it would pretty much debunk the whole "nine dash" assertion.

Would China abide by a ruling against it?

Almost certainly not. But a number of countries have said that it should, including a small nation in the South Pacific, New Zealand.

Which may explain some of the frosty welcome for Key via the media?

Yeah. Although those articles don't seem to be loading.

That's odd. What was Key's response to being warned off the South China Sea issue?

What was the impact of the Chinese media pieces warning against raising the South China Sea question?

It meant NZ travelling media raised the South China Sea question, with Key and in their reports, and meant there was no way Key could avoid raising the issue with President Xi.

And both those pieces have since vanished?

Hard to say. Maybe someone in authority felt they'd been overdone. Maybe the New Zealand response led them to think they'd backfired.

Or maybe we underestimate the awesome geopolitical muscle of New Zealand.

How is the China trip going otherwise?

Not bad. An upgraded trade deal looks likely. Mr Key has signalled meanwhile that he's willing to agree an extradition arrangement, as long as there's no chance of torture or the death penalty (impossible, says Amnesty International).

Don't stick your Kiwi beaks in the South China Sea or you'll get no trade love from us, roars the dragon. Then, puff, it's gone.

Better we stick to pandas.