Climate change could swamp significant areas with even modest rises in sea levels, a report by the prestigious Royal Society of New Zealand says.

Places at risk include eastern Auckland along Tamaki Drive, where a 0.5 metre surge would inundate popular areas. The following map shows the damage from sea level rises of several gradients between 0.5 and two metres. 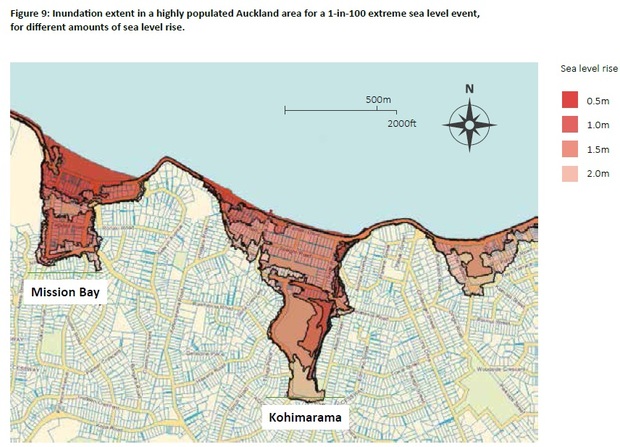 Coming from New Zealand's pre-eminent research body for science, the report confirms the severity of the local threat posed by climate change. Chair of the expert panel which wrote it, Professor James Renwick, said New Zealanders were particularly vulnerable.

Read a summary of the report here.

"Many New Zealanders live on the coast and two-thirds of us live in flood-prone areas," he said.

In South Dunedin, a high water table meant high tides would lead to frequent surface ponding and a lack of drainage for storm water.

The report added that the east coasts of both the North and South Islands were sensitive to erosion and inundation caused by climate change.

The Royal Society's warnings come just a day after New Zealand was accused of cheating over its main climate change weapon, the Emissions Trading Scheme.

In its report, the Royal Society broke down its analysis into several key areas.

One was the effect of climate change on coastal environments.

Depending on how greenhouse gas emissions were managed, the sea would rise between 30 centimetres and 1.1 metres by 2100, it said.

This would have an exponential impact, making it likely the current one-in-100-year extreme sea level event would occur every year in some places and making storm surges much more potent.

Ponding and soil saturation from previous floods would aggravate the effect.

Freshwater resources would also be harmed by climate change.

The report said rising temperatures and reduced annual average rainfall would increase the demand for water for agriculture, increasing reliance on irrigation.

Droughts would be more severe and would occur in places not prone to drought now.

The report also warned of dangers to water quality in the ocean surrounding New Zealand.

The surface of the sea would rise in temperature by one degree to three degrees, though this would be more marked to the west of New Zealand than to the east. 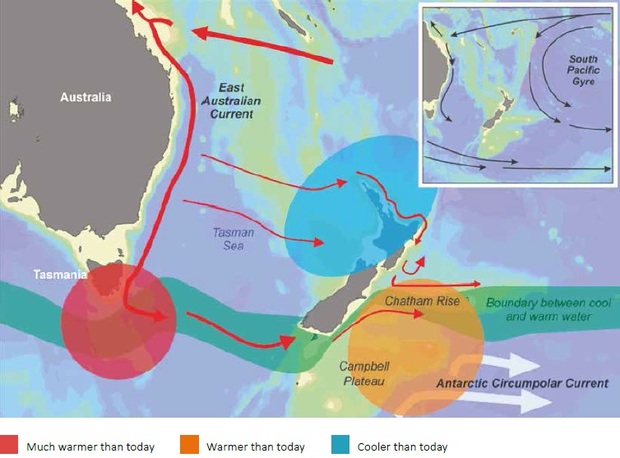 Changing sea temperatures around New Zealand over the next 100 years. Graphic: Royal Society of New Zealand

The report is particularly strong on increased fire risks.

This would increase in both severity and the duration of the fire risk season.

Not only would it be hotter and drier in some parts, but high CO2 levels would increase plant size in some cases, creating more material available to burn.

And the aftermath of a fire increased the risk of soil erosion. 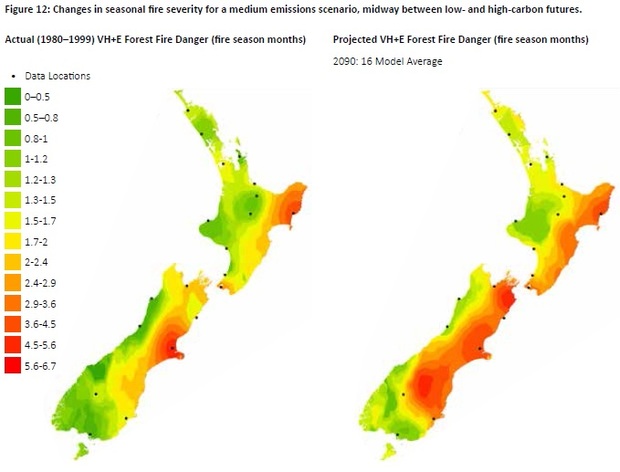 Professor Renwick went on to warn that even small changes in average conditions could be associated with extreme weather.

He added a pattern of wet areas getting wetter and dry areas getting drier along with extreme weather would put pressure on our housing, infrastructure and industry.