Building regulators are checking how much Steel and Tube seismic reinforcing mesh has been used in commercial or multi-storey buildings, as wire rod maker Pacific Steel denies a conflict of interest over testing. 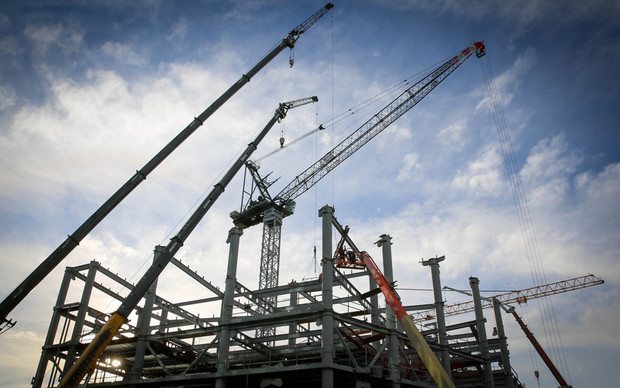 The Ministry of Building, Innovation and Employment (MBIE) says it's not yet clear how many buildings the mesh has been used in, but the buildings will be assessed on a case-by-case basis once it knows.

A sample of Steel and Tube's seismic mesh failed Commerce Commission strength tests this week, and the company has withdrawn it from the market.

Tests are now underway on mesh from the biggest supplier, United Steel.

MBIE said regardless of test results, there were no concerns over safety or compliance with the Building Code for houses.

MBIE, however, has not provided its analysis, making its advice difficult to judge.

The stretchability strength standard for mesh was raised from 2 to 10 percent after the Canterbury quakes. MBIE said homes built with mesh made since then would still be more resilient than many thousands of houses built before 2011.

The mesh revelations have triggered industry arguments over the way tests are done, the testers themselves and the standards they tested to, and whether they were good enough.

Mesh suppliers were alarmed with importers Euro Corp and Brilliance Steel failing the tests, before domestic-steel processor Steel and Tube also failed. All three have been taken out of the market indefinitely.

After coming under fire for three weeks, Steel and Tube had external tests done to try to validate its in-house testing - but these produced such varied results it has only compounded industry uncertainties.

In response, supplier pressure has gone on the testing labs, and in recent days two labs have applied to the Crown agency International Accreditation New Zealand (IANZ).

Given that only two labs are currently accredited to test mesh - Holmes Solutions and SAI - this will double the country's top-level testing capacity.

"We are preparing for all the others," Dr Richards said.

"Clearly suppliers are concerned to ensure that the test results on their own product are accurate and can be relied upon."

The standard does not require independent testing by an accredited lab, something Steel and Tube and United Steel have been quick to point out.

But Steel and Tube has now decided not to sell any more seismic mesh unless it has been passed by an external tester.

This week it engaged Pacific Steel for that task, but Pacific Steel was also the country's only maker of the wire rod that the mesh was made from.

This meant the company that made the steel, and sold it to Steel and Tube, would now be the one that gave the final seal of approval to its customer's mesh.

Pacific Steel head Robin Davies denied that was a conflict of interest.

"I believe it's independent testing of the finished product," he said.

"We are bound by legal obligation to meet the standard and our testing is independently accredited. I believe we are independent from Steel and Tube."

Pacific Steel also had this same arrangement - making and selling the steel, then testing the mesh it was made from - with Fletcher Distribution.

United Steel said the Commerce Commission's ongoing testing of its mesh was not expected to raise any issues or impact on efforts to prove the mesh was compliant.

United is still where Steel and Tube was a few days ago - doing most of its mesh testing in-house.

It said it had modern lab equipment in its two factories that was regularly calibrated and managed by engineers, with its results checked against external testing. It also said it held an extensive database of test results, which was important to meet the standard.

RNZ News has asked United which calibrator and external tester it was using, and whether they were accredited by IANZ.

In a statement, United Steel executive director Richard Anyon said the wider issues the industry faced was "the consistency around how different parties test and the interpretation of the testing procedures".

"The industry needs to agree on a consistent robust testing regime by all industry players."

Calls for standards to be revised

Three of the main labs - Holmes Solutions, SAI and SGS - have now agreed on a common test method, which should make the results more trustworthy.

Dr Richards said the standard needed revising, so it was more precise.

Pacific Steel, however, said it had no problem interpreting the standard and testing to it.

Its own lab is third-party certified and audited by Australasian Certification Authority for Reinforcing and Structural Steels (ACRS).

"We are very clear on the standard," said CEO Robin Davies. "We are not seeing that ambiguity.

"Yes, there's variation in any manufacturing process, but we are pretty clear on how to manufacture and test the product today. All the steel is absolutely compliant and there's large numbers of the mesh manufacturers today currently manufacturing mesh which is compliant."

He did agree that elsewhere in the industry something was going wrong. "Yes, yes, we need to work hard to remove any conjecture from the current situation ... we have got to keep working on removing any doubt."

Mr Davies said he was now looking at getting his lab accredited by IANZ.

The Commerce Commission is awaiting more information from Steel and Tube to back its claim its mesh is compliant to the standard, even though a sample failed the tests.

MBIE said that in the meantime, it has advised builders not to use the mesh in concrete slabs.