In his latest documentary Where to Invade Next, Moore compares social welfare and justice policies in Europe with the United States.

He told Saturday Morning that New Zealand should learn from mistakes in the US.

"Your government over the past decade or two has often tried to emulate the American way with neo-liberal policies that are not in the best interests of the people of New Zealand and you need to take a look at what those policies have done in the US.

"I would not try to emulate us in this way because you will have more income inequality - you already do, but it can be worse and you want to stop that.

"You want to preserve the good things you've had over the years, the belief system that you have, the values what you have and not allow conservative politicians to manipulate people into believing it we would be so much better if we did things the way the Americans did it."

Moore visited Finland, Italy, France, and Portugal to look at those countries' ways of dealing with social and economic problems experienced in the United States. 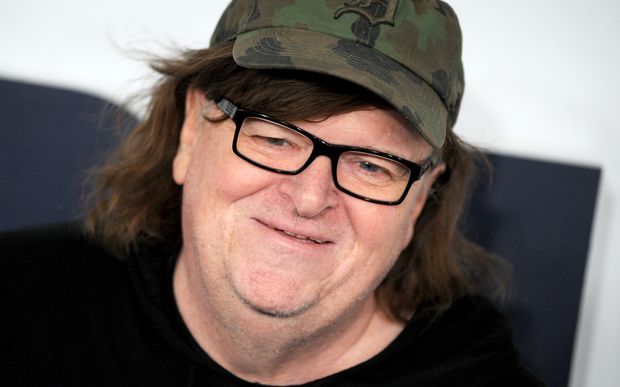 In Norway he attempted to find the worst offenders in prison.

"They are the sweetest bunch of killers I've ever met ... all kidding aside I think the time they spend in prison ... they turn just about everybody around.

"The warden says on the prisoners' first day, we don't have the death penalty, we don't have life in prison, which means you could be out of here some day, you could be living on my block, so I have a vested interest in seeing that by the time you leave here, you are a good, upstanding citizen, taking care of yourself and doing well by others."

"Norwegians aren't doing this because they are better people than us, they're not, they're doing it for selfish reasons because they want to live in a better safer society.

"And they've learned by not locking people up for so many years and not locking them up as animals they're going to have less crime.

"In fact, they do have the lowest crime rate in Europe, the lowest murder rate in Europe and they don't mind giving up the revenge part of this if it means their kids and everything else is safer."

He said Americans were oblivious to what life was like elsewhere.

"They don't know what it would be like if we paid just a little bit more in taxes, how many more services we would have, how much easier it would be to go to university, how there would be day care, how if they got pregnant you actually get to take a few weeks off - how about a few months - Americans don't know you get these things in these other countries and so it's been a very big eye opener for people in this country."

His first film in six years, Where To Invade Next, will screen at the New Zealand Film Festival Autumn Events programme in Auckland, Wellington, Christchurch and Dunedin, during April and May.