The Reserve Bank has lowered the Official Cash Rate to a new record low of 2.25 percent, and the New Zealand dollar has fallen 1 cent in response. 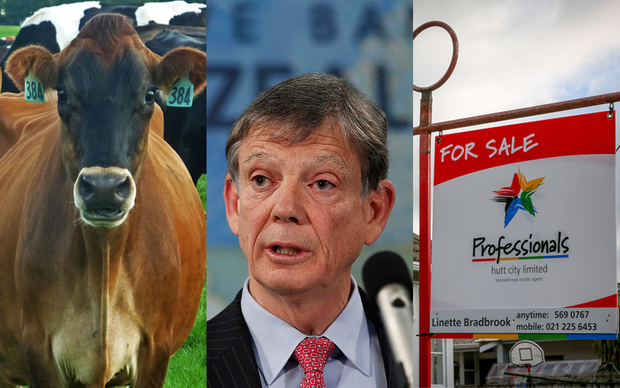 "Further policy easing may be required to ensure that future average inflation settles near the middle of the target range."

The elevated dollar had remained an irritant to Mr Wheeler, who reiterated that a decline in value was appropriate, given the weakness in dairy prices.

It has dropped nearly 1.5 cents against the US dollar to 66.5 cents, and by more than 1 cent against the Australian dollar, to 88.9 cents.

Wholesale interest rates have also fallen, and a drop in retail lending rates is expected.

Despite the economy notching reasonable growth, Mr Wheeler, who had appeared reluctant to cut the rate only a month ago, said the threats had increased.

"There are many risks to the outlook."

They included the effect of weaker dairy prices on farmer incomes, ebbing inflation expectations, a higher cost of funding for banks and slowing global growth.

Some analysts worry that a rate cut will fuel an already overheated Auckland housing market.

But he said recent measures to curb price growth in the country's biggest city appeared to be working.

"House price inflation in Auckland has moderated in recent months, but house prices remain at high levels and additional housing supply is needed."

Mr Wheeler also indicated more rate cuts might be needed to push inflation back to the midpoint of 2 percent.

But he admitted that headline inflation, which he expected to rise this year, would take longer to get to the middle of the target band of 2 percent.

Financial markets had priced in a one in four chance of a rate reduction today, betting the central bank would wait until later in the year before cutting.

Economists had also expected the rate to remain unchanged.

Westpac chief economist Dominick Stephens said a rate cut had been expected, but not so soon.

He said the key reasons for the cut were concerns over the worsening international economic environment, and the recent fall in inflation expectations.

Mr Stephens said the Reserve Bank's interest rate forecasts point to another 0.25 cut, to 2 percent, probably around the middle of the year.

The OCR: What the experts are tipping