A witness who chased the masked gunman who had just fatally shot two Work and Income staff has told a court the shooter started "freaking out" when confronted. 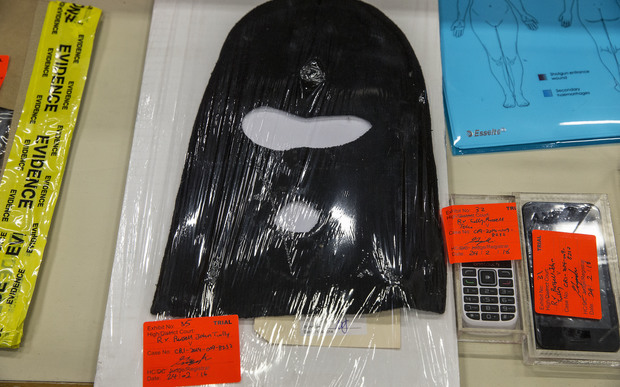 Russell Tully, 49, is on trial for the murders of Peggy Noble and Leigh Cleveland and the attempted murders of their two colleagues, Kim Adams and Lindy Curtis, at the Ashburton office in 2014.

Today marks the fifth day of the trial in the High Court in Christchurch; the accused, Mr Tully, is not present today in court.

David Cooze told the High Court in Christchurch today that he was talking to receptionist Peggy Noble when the masked gunman walked into the office and shot her.

Covered in gunpowder, Mr Cooze ran from the building.

Once the shooter left the building, he confronted him, ignoring warnings that he would be shot if he didn't back off.

"He started freaking out. I rattled him that much he dropped his helmet and bike lock on the ground."

Mr Cooze ran after the gunman, coming within a metre of him as he made off on his push bike, but could not catch him.

Jane Hayman - another Winz case manager who worked alongside those killed in the shooting - described hearing a loud explosion while she was sitting at her desk as the masked gunman shot Ms Peggy Noble.

"I initially thought that he might run out but when I saw him reload, I knew he was going to come around and shoot all of us so I got up and left."

Ms Hayman managed to escape and ran across the road to call the police.

Earlier today, Ms Curtis, who was wounded in the shooting, told the court she heard another woman pleading for her life.

Ms Curtis became emotional as she gave evidence this morning.

"I was sitting at my desk helping a client when I heard a blast ... When I looked up, I could see a man in a balaclava with a gun. I thought it must be a hoax or that he was going to take us hostage."

That thought only lasted seconds as the gunman started moving around the office, she said.

"I told my client to get under the desk and I joined him. I don't remember the exact sequence of events but I remember watching his feet moving around the office."

The next thing she knew, the gunman was in front of her.

"I could see him holding the gun; the last thought that went through my mind was that I was history, and I wondered who would take care of my family."

The Crown has told the court Ms Curtis avoided being killed only by raising her leg when the shots were fired, which shielded her body.

"I remember him looking at my leg. He could tell he had shot me in the leg, so I thought he would finish me off and shoot again, but he didn't," Ms Curtis said.

She recalled hearing another woman pleading for her life. "I could hear a very emotional voice saying, 'Please, I beg you, I beg you, you don't have to do this' then I heard a blast."

Ms Curtis told the court she didn't recognise the voice because of the emotion in it.

The court was told she went through a four-hour operation to remove about 170 shotgun pellets from her leg.