A man whose six-year-old son was pepper sprayed during a large brawl on a south Auckland street says the police response was over-the-top. 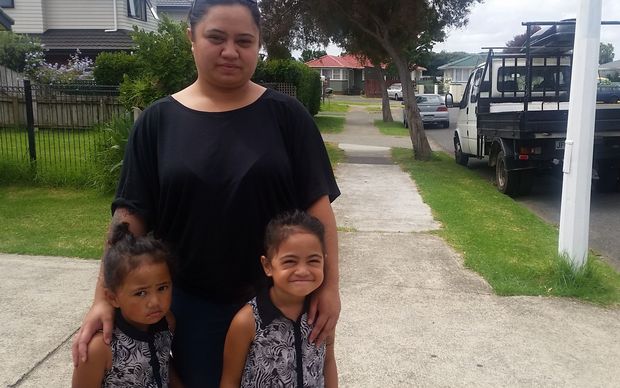 Maria Panapa with daughters, Zaraiyah-May, left, and Xzandra-Leigh outside the Mangere house where the brawl broke out on Sunday. Photo: RNZ / Carla Penman

Residents said up to 20 police officers were called to Lavinia Crescent in Mangere just after 10am on Sunday, after a person was allegedly stabbed.

Footage of the incident has been posted to social media, showing officers and residents fighting and the six-year-old, who had been riding his bike near the chaos, walking away rubbing his eyes.

Resident Puna Strickland said he saw a police officer punch a woman who had been handcuffed.

"She was not resisting or anything. She was trying to help one of the ladies that was next door... Then it just got started from there. And then one cop came, and then another followed."

He said he saw a young boy caught in the pepper spray crossfire and another young girl thrown to the ground.

The six-year-old boy's father, who has asked not to be named, said he was sitting in his car when the police arrived.

"What I witnessed was a police officer assaulting my next-door neighbour when she had already been detained... That's how it all started... There was no need for that."

It wasn't until his son came running to him rubbing his eyes that he realised he'd been sprayed, he said.

"It wasn't only him, it was also my pregnant daughter. They were out here when it happened. It all happened so fast... it was too late to get them away from it. The damage had been done."

His 17-year-old daughter had to go to hospital because of what appeared to be pepper spray burns, he said.

"They shouldn't have [done] that in front of the kids. What's their priority? To keep the community safe? That's the priority isn't it? Was it their priority in that video?... No. You could see the kids there."

The man said the police didn't give him and other parents a chance to get their children, who had been playing out on the street, out of the way.

He said despite what he believed was an over-the-top police response, he would not be laying a complaint.

'It just turned into a brawl'

It was a different story for mother-of-two Maria Panapa, who lives a few houses down from where it all took place.

"There were just cars and cars full of police against some of the locals and residents of the street.

"I don't know exactly what happened. I heard there was a stabbing... then it just turned into a brawl against all the people and the police."

A female officer came over to where she was standing some distance away from the action and tried to frighten her and her two young girls - aged two and three - to move, she said.

"We were standing there and she came and said that I need to get back to my house because it's not safe... And then she loaded her gun in front of me and my kids."

Ms Panapa said that was unnecessary and she was angry it had happened in front of her children.

She was considering laying a formal complaint with the police, she said.

A man and two women have been charged with assaulting, resisting and obstructing police.

Counties Manukau West Area Commander Jason Hewett said police were attacked when they tried to make arrests and back-up had to be called.

Pepper spray was not intentionally used on the six-year-old and the incident was regrettable, he said.

"Adults who were surging in to help prevent them arresting - unfortunately, and you can see it on the video clip, there is even a woman with a baby on her hip running towards the melee, and other kids mingling around."

Mr Hewett said if a complaint was laid, it would be investigated.

He said he was not aware of any reports that a police officer had loaded up her gun in front of a resident and her two young girls in a bid to scare them off.