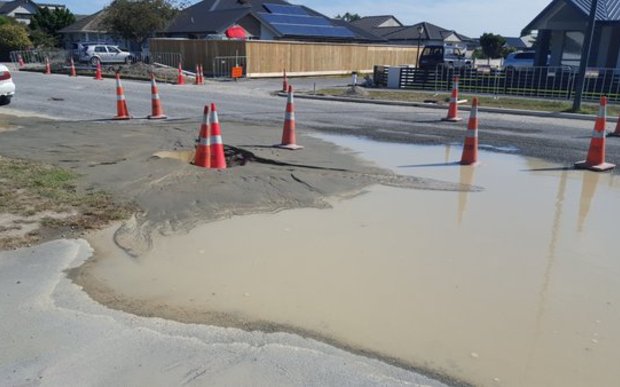 Geonet reported the epicentre of the quake was centred 15km east of Christchurch at a depth of 15km.

Christchurch City Council staff are continuing to carry out checks of council-owned facilities but so far no major damage to infrastructure has been reported.

A Christchurch City Council spokesperson said Hurst Place, Courtfield Close and Bower Avenue had experienced some liquefaction and Civil Defence Response teams had been sent to the New Brighton area to monitor the situation.

Council Rangers have closed Summit Road between Rapaki gate and Mt Cavendish and the Bridle Path and Rapaki tracks are also closed; with rockfall in all of those areas to be inspected tomorrow. 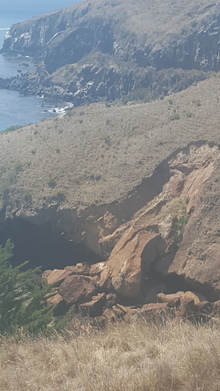 The quake caused a boulder on Godley Heads to break off and slip into the sea. Photo: RNZ/ Sally Murphy

Material has come off the cliffs behind Wakefield Avenue at the back of the Bowling Club, but nothing reached the road.

Scarborough Road has been closed to all traffic, except for residents needing access to their properties, due to cliff collapse.

The council has closed AMI Stadium until further notice and the Ilex and Duck Duck cafes in the Botanic Gardens have also been closed.

There are reports of liquefaction and flooding in parts of New Brighton.

There have been only minor injuries reported.

All public transport is running as normal. The public was initially asked to avoid the Sumner area but cordons have been lifted.

Lyttelton Tunnel has been checked and is open.

The National Crisis Management Centre has been stood down following its earlier activation to monitor the quake. 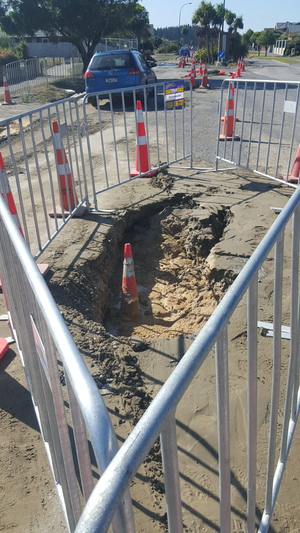 About 500 customers in Christchurch, mainly in the north-east of Christchurch, and about 100 on Banks Peninsula lost power after the quake.

However the lines company Orion had no outages to report this evening.

Teams are checking on the situation and people are being asked to drive with care in those areas.

St John had a spike in calls but are now operating as normal and said people should call 111 for emergencies.

St John is encouraging people to check on their neighbours, friends and family, particularly those who are elderly, ill or live alone.

Anyone who has queries about non-urgent injuries or health issues can call Healthline on 0800 611 116 for free advice from registered nurses.

Mothers and babies have been moved out of Burwood Maternity Unit temporarily, as a precaution while the building is checked.

Canterbury District Health Board said only minor damage had been found to DHB buildings so far, although further engineering inspections were underway.

Chief executive David Meates said any mothers expecting to go to Burwood today or on Monday should check in with their lead maternity carer.

General Practices, pharmacies, after hours services and the hospital emergency department are operating as normal, with no increase in patient numbers so far.

Three schools in Christchurch will be closed tomorrow in the wake of today's earthquake.

The Ministry of Education said there had been no reports of major damage at any schools.

The Ministry of Education's head of sector enablement and support said Christchurch Girls' High School, Aranui High school and St Thomas of Canterbury would be shut on Monday.

Katrina Casey said the ministry had been working with principals throughout the afternoon and said it was contacting all schools and early childhood services to let them know that they should inspect their buildings for any damage.

Ms Casey said that all of the school buildings most at risk had now been demolished since the larger earthquakes occurred.

She said any schools that had concerns should get in touch with the ministry as it had engineers available to check their buildings.

Christchurch Girls' High principal Pauline Duthie said the school had a protocol in place that it did not open following an earthquake of higher than 5.5 magnitude until the buildings had been checked by a structural engineer. That will be done tomorrow and all going well the school will reopen on Tuesday.

Several hundred staff and students have been evacuated from the University of Canterbury's campus in Christchurch, though there has been no reports of damage.

People who may have suffered damage to their home, land or contents have three months to lodge their claim with the Earthquake Commission.

He said geotechnical engineers were assessing liquefaction where it had been reported.

The number of staff in the commission's contact centres is being increased from tomorrow to handle any increase in calls.