There is a 63 percent chance another quake between magnitude 5 and 5.9 will strike Christchurch in the next year, after Sunday's 5.7 quake increased the likelihood from 49 percent. 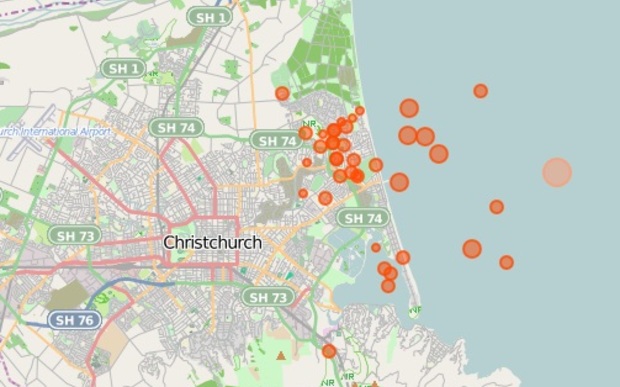 Dozens of aftershocks occurred in the hours following the 5.7 quake - seen in orange. Aftershocks in red. Photo: Geonet

It hit with such force cliff faces crumbled, items fell off shelves and walls and liquefaction started bubbling. It shook the ground, and it shook people's emotions - just eight days out from the five year anniversary of the February 22, 2011 quake which killed 185 people.

Only minor injuries were reported.

There were 62 aftershocks from when the 5.7 quake struck and 10pm, including a magnitude 4.2 quake at 6.27pm. More are expected in the coming days, and the quake has increased the likelihood of larger ones in the future.

It is likely a quake between magnitude 5 and 5.9 will strike in the next year, Geonet said.

The greatest concentration of earthquakes is expected in the next week.

The 5.7 quake was the largest in the city since a quake in May 2012, and was on par with what was felt in the city in December 2011, when a series of strong shocks, including a 5.8 struck, Geonet said.

While the peak ground acceleration measurement was 0.4g - enough for liquefaction to occur - it was significantly lower than the 2.2g experienced in the 6.3 February 2011 quake.

Lifeguards on cliff when it collapsed

A Christchurch lifeguard says he's lucky to be alive after the Sumner cliffs he and several junior lifeguards were jumping off began falling around them in this afternoon's 5.7 earthquake. 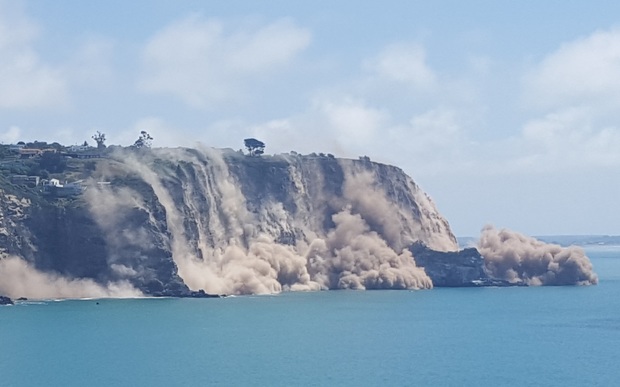 Taylors Mistake life saving club patrol captain Craig Jamieson was showing the group, all aged between 12 and 14, how to jump off the cliff face and perform rescues, when the earthquake hit.

He felt his boat rocking up and down, and suddenly large rocks were falling and a billow of smoke was engulfing them.

Mr Jamieson said he told the young guards, which included his son, to jump into the water and swim to the boat.

Christchurch quake - what you need to know

He said they were all traumatised, but had to jump quickly into action to make sure none of the swimmers or fishers in the area were hurt.

"When I look up where they're standing there, there's a whole sheet of rock that starts falling down over their heads, from the size of a tennis ball to the size of a stove.

"I just said 'look, just get out of there, get into the water and get to the boat as quickly as you can.

"We still had a job to do - we still had to make sure everybody else was ok."

The young lifeguards were traumatised, but jumped into action to make sure none of the swimmers or fishers in the area were hurt.

Is it ever going to end?

Christchurch residents have been left wondering if the quakes will ever end.

"It was just another earthquake I could do nothing about," said Michael, who sat in an armchair in his home in suburban Bishopdale and watched as a magnitude 5.7 quake struck the city.

"I was sitting in my basic armchair and I just stayed sitting and watched it happen because it was just another earthquake I could do nothing about," he said.

"We're just too accustomed to earthquakes." 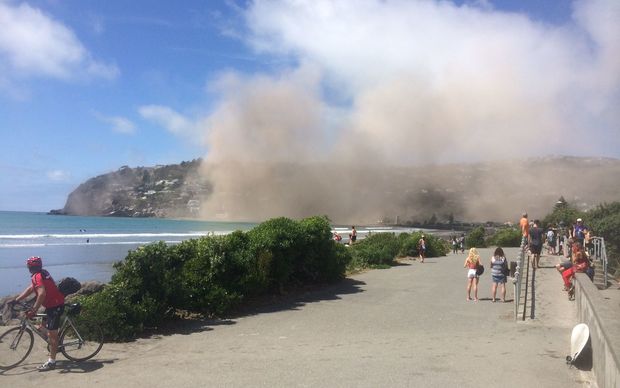 A huge dust cloud follows the collapse of a cliff near Sumner. Photo: Carl Devereux

Michael said he feared what today's quake would do for people's perception of the city.

"My real consideration is what it raises in my mind, and I think probably for a lot of other people is, 'is this going to continue forever now, is this the norm?' Because if it is, I don't think it augers well for attitudes towards Christchurch," he said.

"People started to believe that 'okay, things are going to settle down' but if it continues at this rate, it's not something you would volunteer to go into on a life-time basis." 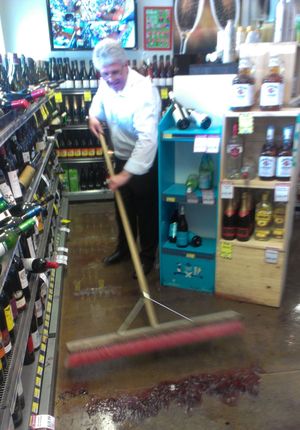 Bower Avenue residents were shovelling silt off the roads this afternoon.

One resident said he had just finished cleaning up his house when he went outside, and noticed liquefaction on the road too.

Another resident Craig McKay said he would consider moving out of Christchurch after today's quake.

He has just finished building his brand new house after his old one was destroyed in the February 2011 quake.

"I just felt the ground violently shaking and everything starting to fall down off the walls. So I just made my way outside and noticed all the liquefaction again, bubbling out of the ground."

He said he was "pretty emotional" about the whole thing.

Christchurch City Council media manager Jocelyn Ritchie said she was in the supermarket when the quake hit.

"It was just that awful sound again, that rumble. It lasted a good 20 seconds, it was stuff falling off the shelves, people diving under their supermarket trolleys, and everyone just looking at each other going 'no not again'," she said.

Ms Ritchie said people were in tears and trying to contact family and friends but the phone systems appeared to be jammed.

RNZ reporter Sally Murphy was walking in Godley Heads track near Sumner and saw part of the cliff collapsing.

"We looked across the ocean and we just saw this huge cliff collapse and as we were walking back to Taylors Mistake, where our car is, the rocks were still falling. I think they've been really unsettled by the quake ... now they've all started to fall down."

A number of other people contacted RNZ with their experiences.

"We had lots of liquor bottles coming off the shelves and in the kitchen there quite a few utensils around." - Joe's Garage maître d'

"I'm on Clifton Hill at Sumner. Whitewash Head falling into the sea again is not something I thought I'd see twice in my life." - Linda

"I've been through all the quakes here, this was the first time I've burst into tears and got under a table. So scary, I was at the Palms Mall and the movement was instant and orderly everyone left immediately."

"People got out of cars because it felt like the wheels were falling off!" - Michael Aitken

"Quake was long & strong but no apparent damage. Our cat completely ignored it and kept on eating while the house shook & made noises!" - Anne

"Very strong on the hill in Lyttelton. Some minor damage to house. Significant damage to nervous system!" - Sarah