The mother of a baby injured in a police pursuit in West Auckland has left hospital, but her baby remains Starship Hospital in a stable condition. 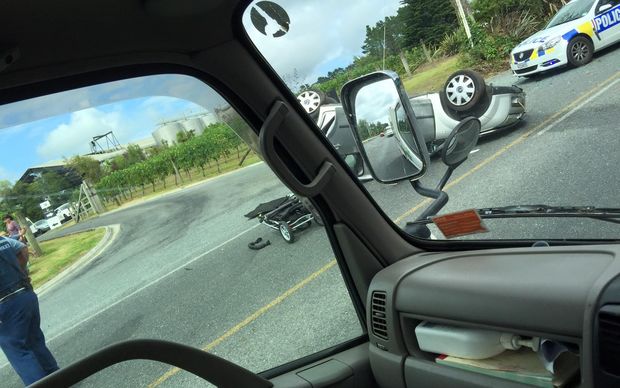 The pair were injured when the car they were in rolled on State Highway 16 yesterday following the chase.

The 22-year-old man who was driving the car was due to be released from Auckland Hospital today and to appear in Auckland District Court facing a breach of bail charge. Police said further charges were likely once an investigation into yesterday's crash was completed.

Police said the car had reached a speed of more than 120 km/h before the pursuit began, and reached speeds of up to 150 km/h during the five-minute pursuit.

The car ended up on its roof on the road outside the Coopers Creek winery near Kumeu. A five-month-baby, who had been in the back seat, was found lying next to the car after it rolled.

The Independent Police Conduct Authority this week made fresh calls for police to cut the number of pursuits, saying too many young people were dying. Police Commissioner Mike Bush and Police Minister Judith Collins said the current policy is appropriate.

Mr Lambert said said police chases in New Zealand would be reduced by up to 90 percent if police followed the same rules in many Australian states.

"In New Zealand there's about a 20 percent chance that there'll be a crash, and [in about] one in every 370 pursuits someone will die

"There's no justification for that, especially when 40 percent of those people injured and killed are innocent people."