The High Court has reserved its decision regarding a case about debts owed to the Bank of New Zealand by a man who owns a private Abel Tasman beach and his business partner. 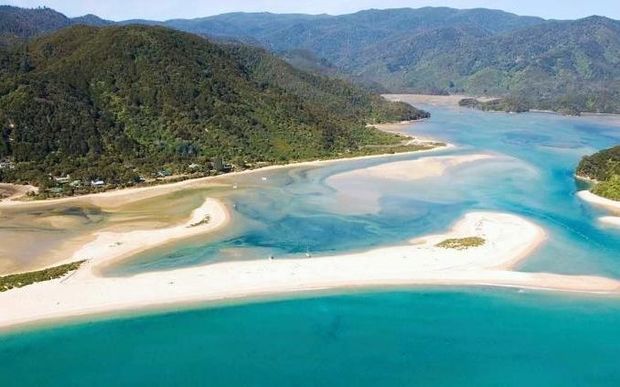 The stretch of land at the centre of a crowd-funding campaign. Photo: Wilson's Abel Tasman.

The BNZ holds a mortgage over the beach.

The beach has been the subject of a crowd-funding campaign to buy it and make it a public area. The $2 million needed to buy the beach was reached in pledged donations early on Friday evening.

Its owner, Michael Spackman and his business partner and son-in-law, Mike Garnham, and some of their companies owe the Bank of New Zealand about $6 million.

The Bank's lawyer, Richard Gordon told the court today the case was a straightforward matter of debt recovery.

The bank wanted to force the sale of properties over which it held mortgages so the debt could be repaid, he said.

That included seeking vacant possession of a property in Seatoun owned by Mr Spackman and occupied by Mr Garnham.

"If they won't turn it into cash to repay the loan, then the bank is entitled to do it and will."

When Mr Garnham fell behind in his repayments, BNZ increased his monthly repayments by $17,000 a month, Mr Gordon said.

However, between June and October 2013, before the loans rolled over, the defendants had not made any payments to the bank at all and Mr Garnham said he was "righting the ledger".

At the time the rollover occurred Mr Garnham had freely disclosed his financial difficulties, but now he appeared to blame everything on the bank's actions.

The bank's case was irresistible and summary judgment should be granted.

However, defence lawyer Jaesen Sumner said his clients' main concern was why they were paying an extra $17,000 a month and that was discussed at a meeting between Mr Garnham and a bank employee.

Mr Garnham acknowledged there was a heated discussion and it was agreed the loans would be rolled over as had happened previously, he said.

There were no written documents, but Mr Garnham's evidence was that he had had a 25-year relationship with the bank and there was an expectation that conditions around the loans would roll over as had happened with previous loans, Mr Sumner said.

Mr Garnham believed it was "unconscionable for the bank to use loan expiries as a blunt instrument to force default", he said.

His clients continue to maintain they were misled by the bank and the case was not suitable for summary judgment, but should go to a full trial, he said.