The government may be left red faced if it can't find an iwi to perform its official pōwhiri for the Trans Pacific Partnership signing this week. 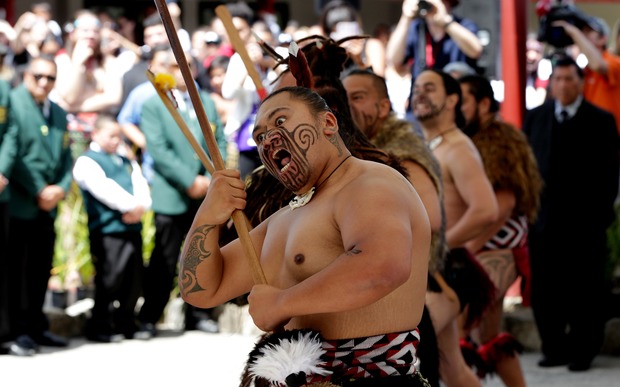 A pōwhiri welcoming Prince Charles and his wife Camilla during a visit to Turangawaewae Marae in Ngaruawahia in November last year. Photo: AFP / Pool

Ngāti Whātua o Ōrakei, the mana whenua in Auckland central where the signing is to take place, has refused to participate because it believes the multinational trade deal will undermine the country's sovereignty.

Five more Auckland iwi are refusing to perform the Māori welcome, as are all of Auckland's usual haka groups.

Ngāi Tai ki Tāmaki, Ngāti Tamaoho, Ngāti Tamaterā and Te Kawerau ā Maki have not responded to RNZ's requests while Te Ākitai Waiohua declined to answer but said they had not been approached.

Leader Tapeta Wehi told audience at Auckland's anniversary weekend celebrations the arts group supported Ngāti Whātua o Orakei's stance and would not perform in a pōwhiri for the TPP.

Just one iwi in the Tamaki Collective, Ngāti Maru, and one hapu, Te Runanga o Ngāti Whātua, have said they would participate if asked.

Tame Te Rangi, spokesperson for Ngāti Whātua's runanga - the mandated entity of Ngāti Whātua - told RNZ they had agreed to participate based on tikanga and the custom of hosting guests.

A tikanga exponent from Ngāti Pukenga, Te Awanuiarangi Black, said while hosting guests was important, it came down to each individual iwi and iwi could decide how they expressed that or not.

"There are examples in our history in Māori history of iwi that have stopped manuhiri or people coming onto the marae or haven't afforded them pōwhiri or kōrero to show that they don't agree with a stance that an iwi has taken.

"I think Ngāti Whātua o Ōrākei and people who have said they don't want to pōwhiri are well within their rights to do so."

With just four days until the TPP signing, the Ministry of Foreign Affairs and Trade, which is organising Thursday's event, will not say whether any group had agreed to perform.

In a statement a spokesperson said: "We'll be releasing more information on the signing ceremony programme closer to the time."