OPINION: Maybe it's just a bunch of cows cooling off; or maybe it's the biggest theft of public assets for private profit since colonial times.

So it turned out the cows defecating in Lake Taylor belonged to the country's top judge, Dame Sian Elias, whose very title - Chief Justice - would imply some appreciation of the principles of fair play.

It was a hot day. The cows had no water, so the farm manager let them drink from the high country holiday reach.

What's the big deal? When I read through comments on Facebook, outraged posters were themselves told by others to "get a life," that there "were much bigger things to worry about".

I had to agree. I worry more, for example, that we've stood by and watched private interests appropriate our single most valuable public asset for private profit.

We did nothing while they turned crystal clear public water - the stuff we used to swim and fish and kayak in - into grass, then milk and meat, then money. 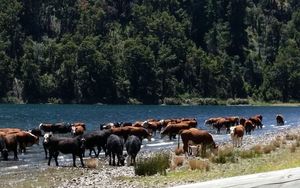 Then they filled that water with poo, silt and fertiliser and let it run back into the rivers, lakes and artesian systems.

It bothers me that we did nothing to stop them. It irks me that we taxpayers helped bankroll the irrigation schemes that bilked our own rivers, even as they added millions of dollars of capital value to private farming assets.

And it incenses me that, once big agriculture had made a fortune out of our water, they handed us the bill to get it cleaned up again.

This is called externalising costs. If there were any fair play - any real justice - at work here, polluters would pay for the costs incurred by their profiteering.

But in New Zealand, they make you do it. It's cheaper for Dame Sian to let her cows go wading in your lake than to fork out for farm dams or troughs, and too few people are angry enough to change that.

The government has committed just under $14 million to rehabilitating such fouled reaches as Lake Ellesmere, and the noxious Manawatu River, found by the Cawthron Institute to be the filthiest river in the western world.

The Lake Taupo clean-up was projected to cost at least $80m, but needs much more. The Waikato River will need at least $210m before it even begins to run clear again. The Rotorua Lakes will cost at least the same.

All these projects are funded by tax - and ratepayers; more than $450m so far to clean up their own lakes and rivers after farmers have finished with them.

If there were any justice, the National government would not have dismantled a democratically-elected regional council, installed its own puppet administration, then summarily suspended public elections so it could impose irrigation schemes on the people of Canterbury.

If there were any fair play, it would not have stripped local ratepayers of their right to appeal that travesty to the Environment Court.

New Zealanders pride themselves on being laid back - "no worries", "sweet as" - and it should be a trait to celebrate. But there's easy-going, then there's apathetic. Either way, we're getting screwed.

Dame Sian and her millionaire husband, Hugh Fletcher, face a fine of $750, but if Environment Canterbury's enforcement record is anything to go by, they won't need to pay a cent.

You, the taxpayer, meantime, have so far forked out $450m.

And you still can't swim in the river. Don't get a life. Get angry.

*Dave Hansford is a freelance science and environment writer and blogger.