Cattle are forbidden from standing in Canterbury's high country lakes but it transpires they are allowed to stand - and poo - in Otago rivers. 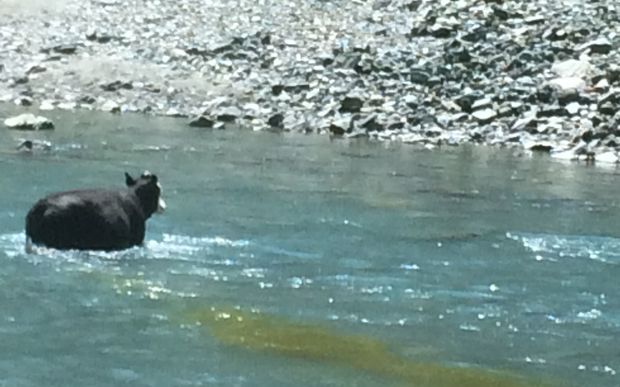 A series of photos was sent to RNZ News showing cattle in the Matukituki River. Photo: SUPPLIED

Both the Department of Conservation (DoC) and the Otago Regional Council said no rules were being broken in the latest case of livestock in waterways, and there would be no action taken against one of the country's most renowned high country stations, Mt Aspiring Station.

More on recent cases of livestock in waterways

Annoyed trampers had sent photos of cattle wandering through the Matukituki River on the doorstep of Mt Aspiring National Park to RNZ.

This came amid the ongoing controversy over cattle owned by Chief Justice Dame Sian Elias and businessman Hugh Fletcher, who were being investigated by Environment Canterbury after pictures came out of their cattle standing in Lake Taylor. 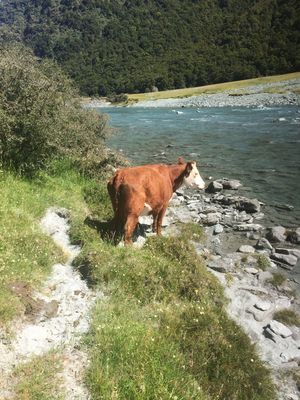 One of the animals owned by Mr Aspinall. Photo: SUPPLIED

In the Matukituki case, the livestock belonged to Randall Aspinall.

The farmer said he was continuing the practice of the four generations of his family who had owned the 2300 hectare station, which carried 10,000 cattle and sheep.

He heard from conservation officials yesterday after the trampers' photos appeared on RNZ's website - but did DoC have a go at him?

"No, they didn't, no. The way they saw it, it's normal farming practice in the high country. I think we are well within Plan Change 6A and certainly the discussions we have had previously with the regional council indicate that they are happy with our current farming practices."

Plan Change 6A sets out Otago Regional Council's limits to protect water quality. Those limits don't actually come into force until 2020, but Mr Aspinall said he was already meeting them.

His cattle did cross a marginal strip 20m wide on either side of the river, and DoC did not issue licences to graze such a strip.

But a senior DoC solicitor, Pene Williams, said as long as they were not lingering on the banks, or being fed out there, or damaging the riverbed, it was OK.

"They're not breaking the rules or certainly not in terms of land administered by Department of Conservation," Mr Williams said.

"There have never been huge numbers of animals in the Matukituki and then you have to think about that in terms of, you know, what are the environmental outcomes downstream, and Lakes Wanaka, Hawea and Wakatipu have amongst the highest water quality in New Zealand."

DoC did say it was working with the Aspinalls over the problem of cattle crossing marginal strips to the river.

The regional council had not had a complaint about the Aspinalls and was not investigating.

In Otago, the water rules were not as strict as in Canterbury, where the waterways were more degraded and with more stock around.

The trampers who talked to RNZ were considering whether to complain to the regional council.

They said, while tramping over the New Year, they saw more than 100 cattle on both banks of the river just before a swing bridge that led into the national park, though the cows weren't in the park itself.

Where they roamed was a mix of the station's and conservation land, with few if any fences. 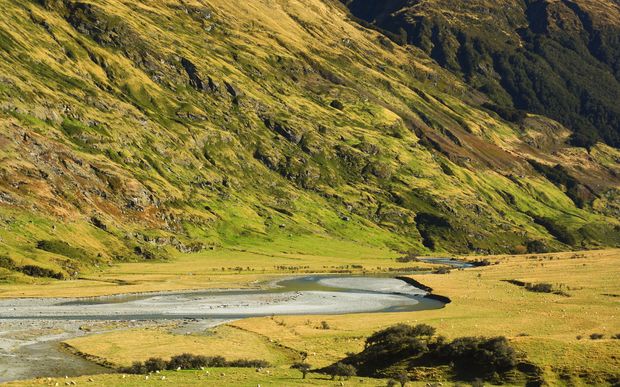 Sheep can be seen in this file photo of the Matukituki Valley in Mt Aspiring National Park. Photo: Robert Harding

Scott MacLean, from the regional council, said animals were allowed into the river to drink.

"If stock were obviously damaging the banks or the bed of the river, that's prohibited activity - and that would be something we would look at.

"We have seen the photos that were sent into Radio New Zealand and there's certainly nothing in those photos that indicates any rules in our regional plan [for] water have been breached.

"In many cases on these high country stations where there is pristine water quality, farming practices are largely unchanged for decades."

Mr Aspinall said the river was in good shape but could be better still. He was fencing off some of the 50 or so creeks that fed into it, alongside paddocks where stock numbers were higher and the risks of flooding destroying fences were less.

But, as for fencing off the entire river, "virtually impossible", he said, and nor did he think it was necessary - and, on that score, the council and DoC agreed with him.