A New Zealander due to be released from jail in Myanmar could be at risk from militant Buddhists, his cousin says. 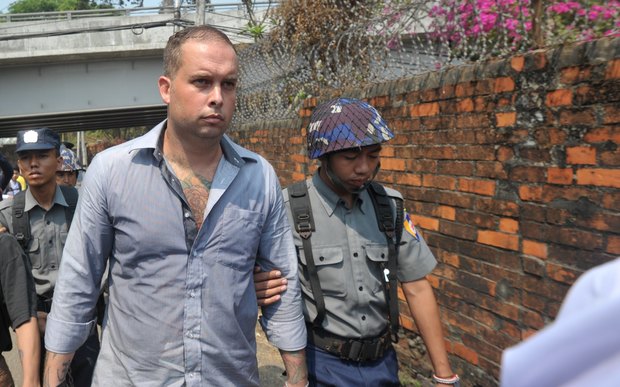 New Zealand bar manager Philip Blackwood, centre, is escorted by police as he arrives at a court for a hearing in Yangon on 17 March 2015. Photo: AFP

Wellington man Philip Blackwood, 33, was sentenced to two-and-a-half years in jail for using an image of Buddha wearing headphones to publicise a bar he managed.

He has been released after nearly a year as part of a presidential amnesty.

Mr Blackwood has dual New Zealand-British citizenship, and the Evening Gazette in his home region of Teesside in Britain reported there were concerns about getting him safely on a plane.

Cousin Chris Blackwood told the newspaper some "militant Buddhists" believed he should have spent much longer in jail and he could be at risk of attacks.

Trying to get his cousin onto a flight back to New Zealand was proving difficult because his conviction put limits on the countries he could enter on the way home, he said.

"It's now just a case of holding our breath and waiting. Once he's on that flight out, then we can celebrate."

New Zealand's Ministry of Foreign Affairs and Trade confirmed Mr Blackwood had been released and said the New Zealand Embassy was continuing to liase with the Myanmar authorities.

It said travel arrangements for his return were well in hand.

Philip Blackwood was imprisoned under the religious offence provisions of the Myanmar Penal Code.