RNZ's newest show Checkpoint with John Campbell has been met with mostly positive reviews from listeners and viewers. 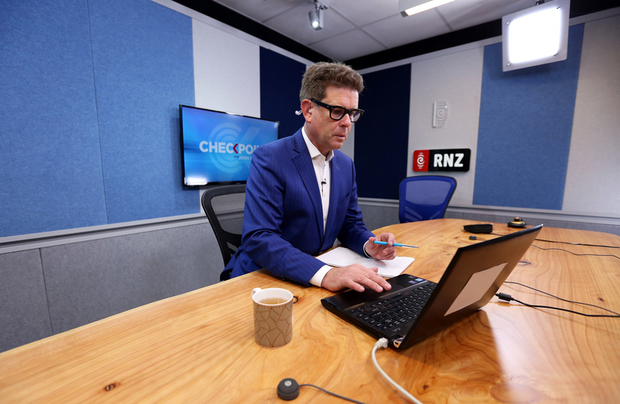 The show launched in Auckland today and took RNZ into a new platform, a first for the public broadcaster, for its editors, producers, newsreaders and reporters - and for its audience.

Staff who are used to being a voice on radio are now getting used to being a face as well, as the new show was broadcast live on Freeview Channel 50, on RNZ's YouTube account and on RNZ's website.

Despite heavy traffic causing some technical problems, fans of John Campbell were pleased to see their favourite newsman back on camera after his departure from TV3 last year.

"Congratulations on the radio with pictures programme and thank you for the opportunity to witness history in the making," Nathalie Brown wrote on the Checkpoint with John Campbell Facebook page.

Some social media users described the show as "brilliant", "relaxing" and "music to my ears" and some others praised the host for being casual, informative and sincere.

The inaugural show featured interviews with the late Jonah Lomu's wife Nadene, who spoke of her love for her husband and children, her devastation at his death and how she was tested to see if she was a compatible match to donate her kidney to Jonah.

"Love the gentleness and sensitivity of this interview. Well done, John Campbell," wrote Sally Lawson in response to the interview.

While most appeared to enjoy the new format - being able to watch the show as well as listen to it - others were not so sure.

Awesome to have John Campbell back but Checkpoint makes pretty awkward TV.

In addition to the interview with Nadene Lomu, the show also covered a rescue operation for a boat off the Whakatane coast, the latest on claims of match fixing in tennis, business news and the ASB Classic needing a $16 million upgrade.

An interview with Tracy Yeats, mother of 13-year-old Grace, explored the issue of medicinal cannabis and its benefits to people suffering from pain.

Overall, while some viewers and listeners were frustrated by technical issues and some weren't so sure about the new format, most social media users said they enjoyed the show, liked the option of watching it as well as listening - and some even shed a tear.

Can't say I've shed a tear listening to a @radionz interview until now. Thanks #Checkpoint. #John Campbell nice to have u back.