A New Zealand amateur astronomer has played a key role in the discovery of what could be the most powerful supernova ever detected. 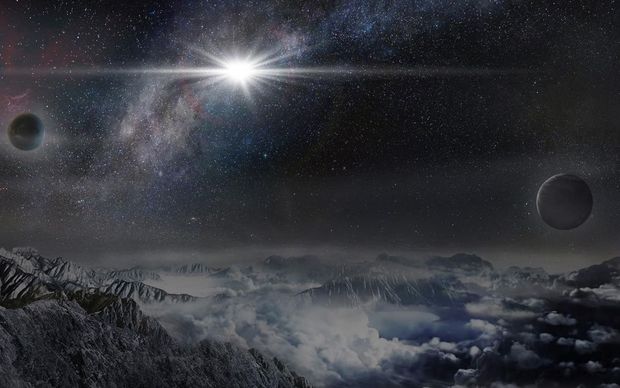 An artist's impression of the superluminous supernova ASASSN-15lh as it would appear from an exoplanet located about 10,000 light years away in the host galaxy of the supernova. Photo: Beijing Planetarium / Jin Ma

The supernova, or exploded star, was 20 times brighter and three times the size of the Milky Way galaxy.

It is almost four billion light years from Earth and was first observed last June. Telescopes are still registering the blast.

At its peak, the supernova shone billions of times brighter than the sun.

He works with a group of professional astronomers out of Ohio State University and they operate what's known as the ASASSN project - the All Sky Automated Survey for Supernova.

Mr Nicholls said the group had eight telescopes in Hawaii and northern Chile and every night they were observing the sky looking for transient objects, generally supernova or variable stars.

"When they pick up possible transients, they send out an alert, and there's six or so of us who follow that up and get confirmation images.

"So this particular object we're talking about, I got the first confirmation of it."

Other people got confirmation images shortly after, which were then examined and analysed by very big telescopes before astronomers realised they had seen something special, he said.

"It's the most luminous supernova ever discovered so it's a pretty big explosion.

"Most of the supernovas we discover are type 1A supernovas. They're always the same brightness, the same luminosity - so when you see how bright they are you can tell how far away they are and they pretty much give us the scale of the universe."

"It's just so luminous, so powerful that no current model really suits it. This one is probably a massive star which is 20 to 50 times of our sun which has gone supernova, but we really don't understand why it's so powerful."

The group plans to use the Hubble Space Telescope later this year to get a better look at the supernova's host galaxy for clues to what caused the blast. If the supernova, known as ASASSN-151h, is at the centre of its galaxy it could have been triggered by a massive black hole.

Black holes are objects so dense with matter that not even photons of light can escape their gravitational pull. Massive black holes are believed to exist at the centres of most, if not all, large galaxies, including the Milky Way.

Another theory is that the supernova was spawned by a magnetar, a rare, rapidly rotating neutron star with an extremely powerful magnetic field, according to Ohio State University astronomer Todd Thompson.

The discovery will be detailed in an article to be published in Science magazine today.