Severe gusts over 140 kilometres per hour have been recorded in Wellington as bad weather continues to lash parts of the country. 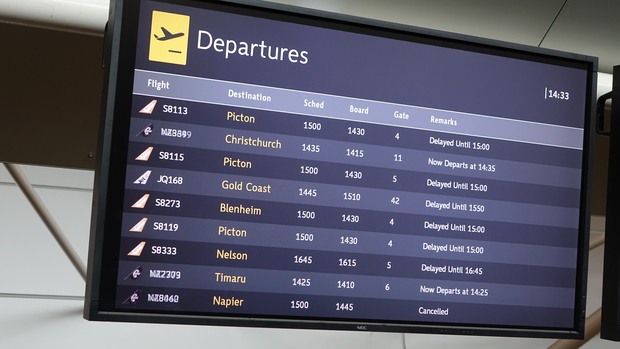 Dozens of flights out of Wellington have been delayed. Photo: RNZ / Mei Heron

There have also been heavy rain and thunderstorms in Nelson, Coromandel, Auckland and Northland with more than 200 lightning strikes recorded over the upper half of the North Island.

In the capital, the winds are creating chaos with dozens of flights delayed and several cancelled.

Some people have been waiting at the airport since 7am today.

Passengers were advised to check with their airlines about cancellations and delays. 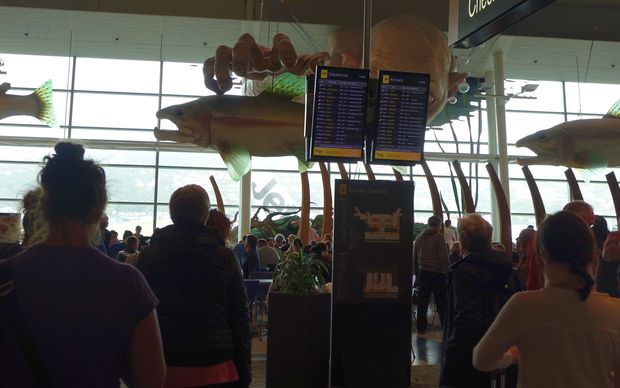 In Auckland, the bad weather has forced the cancellation of some ferry services.

Bad weather has caused the wall of a supermarket on Auckland's North Shore to collapse.

A spokesman for the supermarket chain Countdown said the outside part of the wall of the Sunnynook store collapsed shortly before 6pm, but no staff or customers were in the area at the time.

He said no one was hurt and the supermarket would continue to operate as normal.

Waikato police have asked people to delay any non-essential travel until bad weather in the region clears.

She said there were 11 crashes before 2pm.

Mrs Grace said motorists were not driving to the conditions.

The MetService is warning of possible surface flooding and rising river levels in the Bay of Plenty.

MetService duty forecaster Lisa Murray said there were bad patches of weather right across the country.

"The low system from the Tasman Sea as predicted, has moved across the country starting down in Westland up through Nelson through Wellington and right up the country to Northland.

"We've had some heavy rainfalls in the ranges of Nelson, Auckland and Northland.

"We've had some downpours of up to 25 millimetres per hour with those thunderstorms."

MetService spokesman Gerard Barrow said high winds such as that in Wellington could cause problems.

"Winds of this strength can cause damage to trees and powerlines as well as unsecured structures and could make driving conditions hazardous, especially about higher areas such as the Rimutaka Hill Road."

The heavy rain over northern Westland, Buller and western parts of Nelson should ease this afternoon. However a further 40 to 80mm was likely there on top of the more than 100mm which had already fallen in places.

River and stream levels could rise rapidly in the Tararua Range and the ranges of eastern Bay of Plenty with a significant amount of rain falling in a short period of time.

Share your pictures of the stormy weather with us at - iwitness@radionz.co.nz 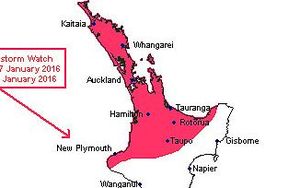 A MetService graphic showing the parts of the North Island expected to be hit by thunder. Photo: MetService

"People in these areas should be on the lookout for threatening weather conditions and listen for possible severe thunderstorm warnings," he said.

The bad weather was expected to ease later this evening.